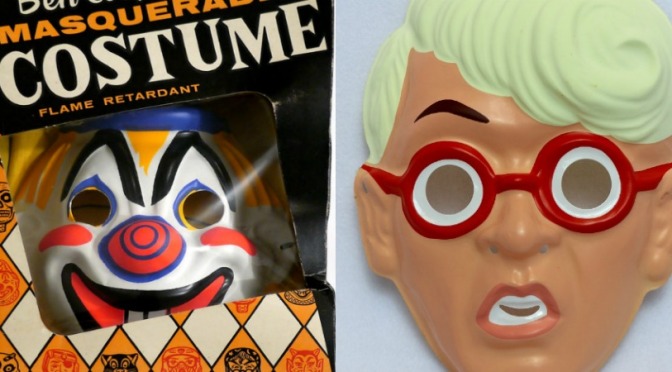 It’s not an opinion- it’s science folks. The beloved Ben Cooper masks and costumes are a symbol of yesteryear’s Halloween. A time where making the neighborhood rounds in noisy plastic costumes while carrying your mom’s pillowcase for the candy haul, or if you were the cool kid, a McDonald’s McBoo Bucket, was the highlight of the year for many little horror-heads everywhere. Whether your Ben Cooper costume of choice was a Master of the Universe, or the doll of false dreams Barbie, I think we can all collectively agree that while we all thought we looked super cool, turns out we really were creeping the shit out our parental units with what my Dad refers to as, “Plastic Heart-Attacks.”

I suppose he has a bit of a point…

Although completely unintentional I’m sure, there truly is no denying the subtle creep factor these costumes gave off looking back on them now with adult(ish) eyes. While of course, these collective images of plas-tastic nightmares are on top of my unsettling Ben Cooper masks list, I challenge anyone reading this to say that they could never picture a serial killer hiding underneath these simple, yet chilling stringed- facial huggers. 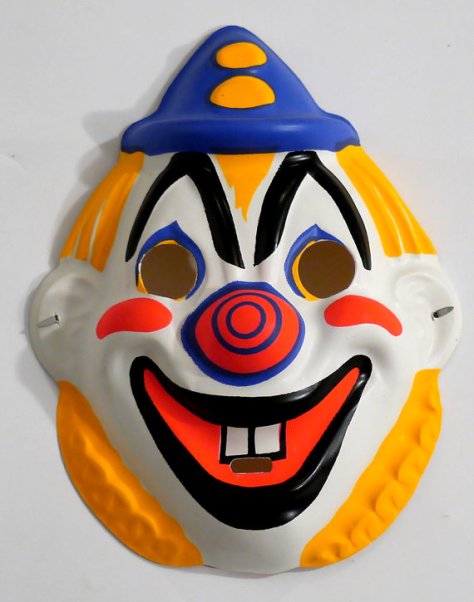 Straight out of your worst nightmares, Happy the Clown surfaced from the company sometime in the ‘80s and in my humble opinion, is the damn creepiest of the many Cooper clown variants over the years. Possibly due to the fact it always reminded me of the heavier set of the trio of clowns from 1989’s Clownhouse. Just. NOPE. 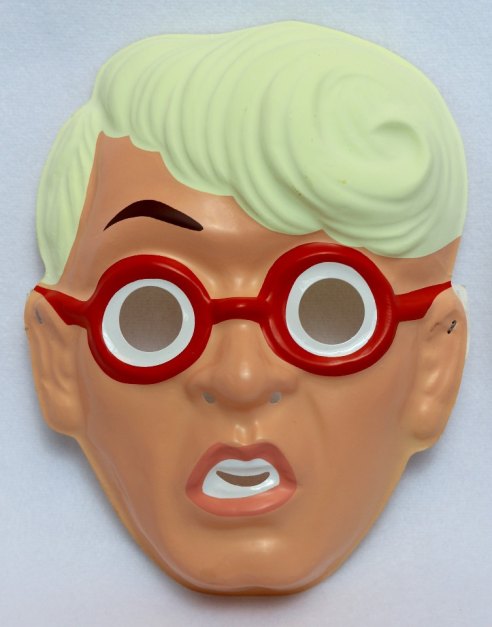 This Egon mask take from The Real Ghostbusters Saturday morning splendor from the mid-‘80s is pretty much the scariest thing ever. My train of thought runs, the simpler the mask, the creepier it comes across. The mildly surprised expression from the Ghostbustin’ favorite makes for something quite eerie here. Give me the ghosts over this plastic nightmare any day. 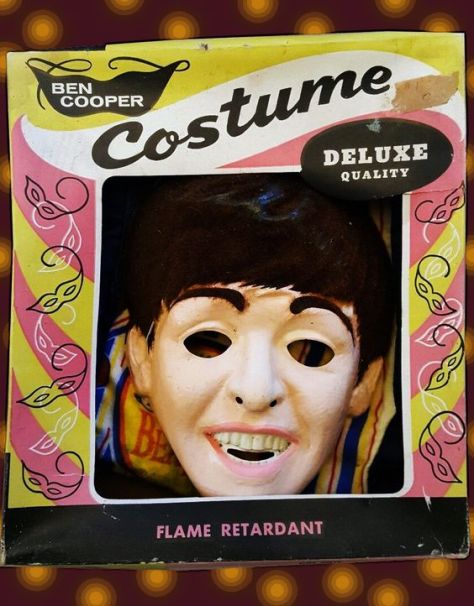 This. Is just bizarre, and I can’t look away. Perhaps what is most perplexing, is how the hell this was deemed a normal mask in 1964. Vintage Halloween never seems to let me down as modern times doesn’t hold a candle to this kind of gem. As stated, my favorite part about this is that is not meant to come off as creepy. Beatlemania never looked so damn terrifying. 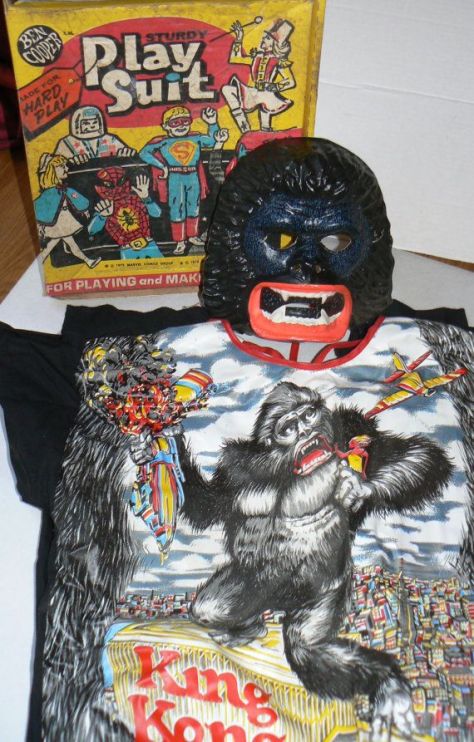 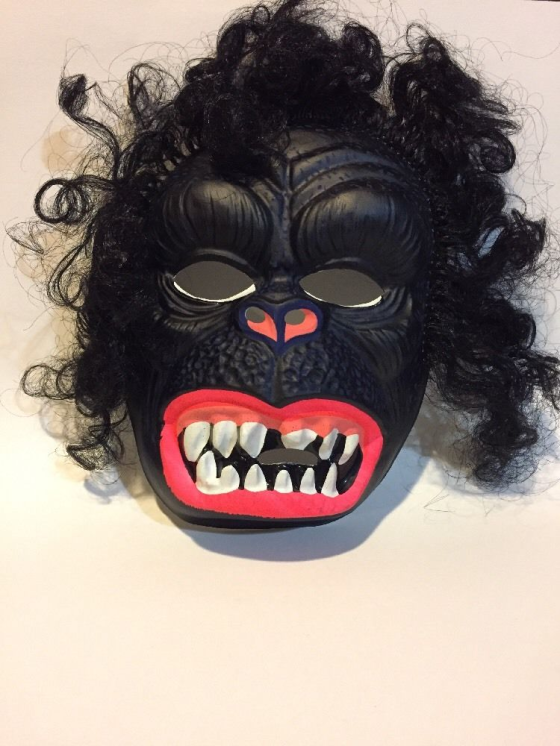 Image via Ebay– Both equally as horrifying.

Because 1976 Kong wasn’t quite scary enough, the fine folks at the Ben Cooper Company just had to release this little number. OK, I know you’re probably thinking, this isn’t so bad? I’ll admit, this is a more personal thing for myself, as 76 Kong traumatized the crap out of me when I was a kid. Aside from the freaky mask, the smock is wonderfully designed with Kong in battle atop the World Trade Center. Which just reminds me of the gory as hell ending from the Dino De Laurentiis production. I got my big girl panties on. Bring on the jokes. 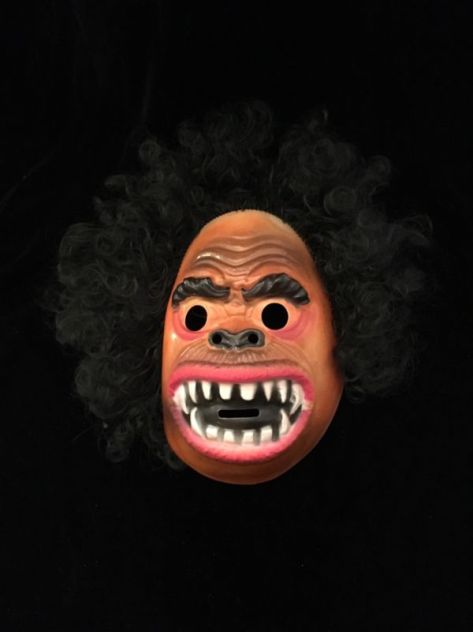 The Hairy & Scary line of Cooper masks add a little extra edge and while all variants of the curly-headed mask are sufficiently frightening on their own, THIS gorilla mask races to the front of the line with the creep factor. Although if you’re asking me, the mask looks more like its channeling the Zuni doll from Trilogy of Terror. Which is why I felt like I would be doing a disservice to readers if I didn’t mention this sucker. 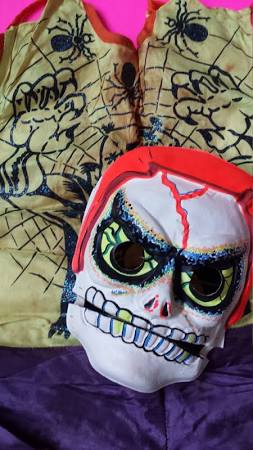 The highly recognizable Chattermouth Ben Cooper line that disables those muffled voices inside the plastic masks, and stepping up the game with a moveable jawline. Productive? Yes. Less horrifying? Not even a little bit.

Phantom of the Opera 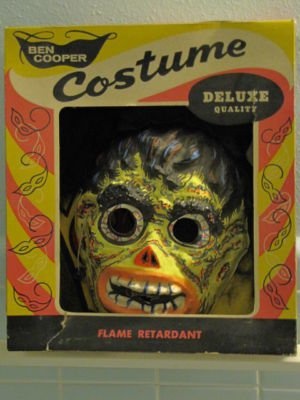 The 1964 Phantom Ben Cooper mask looks more like Leatherface than a Phantom, but maybe that’s why it’s so damn scary. The acidic burns on both sides of the face rather than just the one, gives this version of the Phantom in the Ben Cooper universe a slight edge, even if it’s not what we’re accustomed to seeing. I like that ballsy move. You have to respect that.

Hobo with a Bowtie 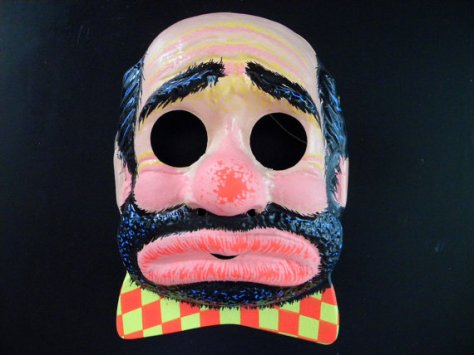 Clearly, the Ben Cooper Hobo is modeled after the infamous melancholy hobo clown Emmett Kelly. If I’m wrong, there’s a hell of a resemblance going on there. Either way, you can’t argue the unnerving facial structure.
The smell of colorful plastic under your nostrils and vinyl smocks ensured that the “High Priest of Halloween” company dominated the scene of Samhain in not just the ‘70s and ‘80s, but for over 50 glorious years until the company’s fold in the early ‘90s. However, a recent exclusive with the son of the “Halston of Halloween” himself Ira J. Cooper over at Bloody Disgusting revealed that the company are in the early stages of a relaunch of the popular brand, giving us fans of what we deem, a true Halloween national treasure some hope for a return of some all-time favorites.

Is there a particular Cooper mask or costume that you feel should be included? Let’s discuss some creeptastic retro Halloween fuzzies below!