How often do we hear Joe Bob toss a word out then immediately repeat that word and look to the crew to ask, “What does (insert word here) mean?” It’s all part of his storytelling, because he wants to be sure the audience is on the same page before he escorts them further down whatever magical rabbit hole he’s concocted for that segment.

The word I want to use is “sustainable.”

What does “sustainable” mean, anyway? It’s about upholding a rate or level, right? So, how does that word pertain to The Last Drive-In? It’s not about Shudder renewing for a second season or further marathons, because I think we can all agree they’d be fools to walk away from the gold rush of subscriptions they’ve sold because of the presence of Joe Bob Briggs. They have a very small crew that isn’t handsomely rewarded for its efforts, and they’ve already paid for the rights to broadcast whatever films Joe Bob chooses every week, so, I ask again—how does “sustainable” enter the equation?

Think about the anticipation and excitement that surrounded the long-awaited return of the Drive-In Jedi for the initial Last Drive-In marathon this past July and the holiday specials that followed. Mutants who had waited nearly two decades for so much as a morsel of drive-in totals were frothing at the mouth and it made sense because it had been so damn long. It’s no different than the fanfare that accompanied the teaser trailers and subsequent release of Blumhouse’s HALLOWEEN (2018) last October and the enthusiasm the horror community is now experiencing for IT: CHAPTER TWO. It’s easy to harbor that type of glee in the short term, even though short can mean a month or two months, and sometimes even a year. But inevitably the film drops, folks attend in droves and it’s all anyone can talk about for a week or two, sometimes more, but without fail it fades and we move on to the next thing. Time is funny that way, it always wins because that type of enthusiasm cannot be sustained for long periods of, well, time. 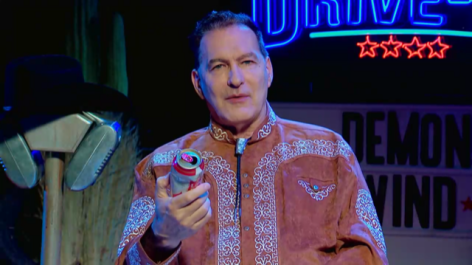 Therein lies the answer to how the word “sustainable” pertains to The Last Drive-In. The first marathon came and went, but it didn’t peak, there was no Joe Bob fatigue. It carried into the “Dinners of Death” Thanksgiving event but didn’t plateau there either because the anticipation for “A Very Joe Bob Christmas” was even higher than the marathon that preceded it, and dare I say the original, as well.

Which brings us to The Last Drive-In’s Friday night double features that began on March 29. After 21 films and well over 40 hours, the fans still hadn’t gotten enough Joe Bob, and what’s more, their hunger had only grown more ravenous. The Last Drive-In, Mr. Briggs and Darcy the Mail Girl are the television equivalent of an industrial-sized tub of The Stuff. We’ve grown helplessly addicted, desperate for our next fix, like a collective dog that just can’t wait to get at Danny Aiello’s throat.

What other horror program can compare? Very few if any are old enough to remember the original run of The Twilight Zone, so it’s possible that show generated the same visceral response from its audience, but with the lack of social media to connect every single viewer to the festivities, that’s doubtful. Hannibal is universally adored, but only lasted three seasons and clearly wasn’t must-see because the ratings dictated its end (damn you, DVR), and The X-Files enjoyed a spectacular run for a few seasons before it too lost momentum. For a show to completely dominate the public consciousness year after year is rare, and Game of Thrones embodied that for nearly a decade until we’ve all recently seen (depending on your perspective) the unfortunate end to that story.

But not The Last Drive-In. Now, before anyone goes off about the fact that The Twilight Zone and Hannibal and The X-Files aired for years when Shudder’s extravaganza hasn’t even existed for 365 days, I’d ask that one not forget part of it is the mystery of what films will be presented, what guest might pop up, or what Felissa Rose has to say about the male anatomy–but more importantly, that word–“sustainable.”

The buzz for Joe Bob and The Last Drive-In has not only failed to level off, it’s intensified, and the reason for that is that this crop of Briggs disciples has been blessed with social media. While that may seem obvious, take a moment to truly think about what that means. The number of people who would watch regardless may not be affected by Twitter or Facebook, but how many tune in because of social media? Because they can keep up with Darcy (@kinkyhorror) on Twitter or interact with fellow fans who are engaged in real time discussions? The days of viewing MonsterVision on TNT in what often times equated to solitary confinement are long dead. Whether one is having a party or quietly watching alone at home, we are all-in together. The pictures, the videos, the GIFs, the art, the clever observations are all captured minute-by-minute, film-by-film, night-by-night, and can be kept on phones and computers and pads to relive and share from Saturday to the following Friday when it all begins again.

It’s an event. Every week.

As Briggs said in the press release that announced the renewal of The Last Drive-In for a second season, “it’s about something larger than horror. Don’t ask me what that thing is, but it’s a source of great joy to me.” So, you see, the fans may come for Joe Bob, but they stay for each other. It’s that shared experience—the commentary, the new friendships, the laughs, the memories we know will last a lifetime—which make The Last Drive-In “sustainable.”

Perhaps things will change if Shudder renews beyond Season 2, but I doubt that very seriously. Sure, we’ve seen it before, but have we seen it with an insatiable army of Mutant minions armed with interweb devices counting the seconds to 9 o’clock every Friday night? I think not. 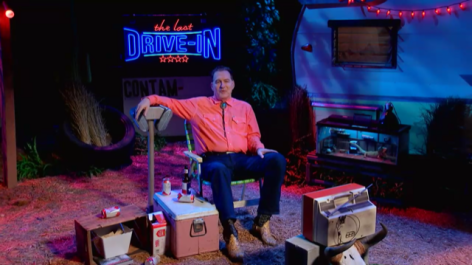