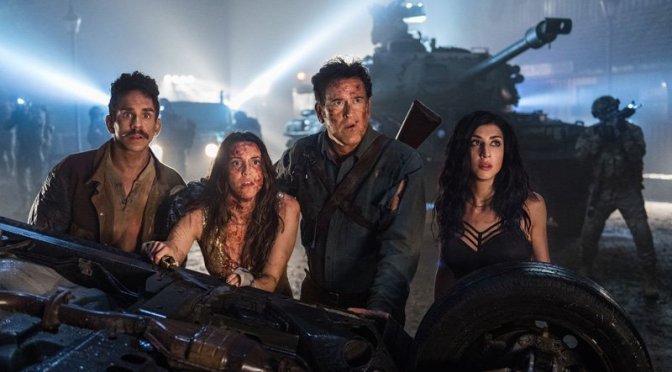 “That’s the key,” Bruce Campbell noted on the DVD commentary of the Ash vs Evil Dead series finale, “give the actors something appropriate to do.” In the end, the lasting image of the EVIL DEAD franchise was not a one-liner or practical effect or or even gallons of blood, but the connection shared between a handful of performers and the audience which followed them on a journey that came to an end one year ago today.

Ash vs Evil Dead offered a surplus of splatstick, but over 15 hours of series life, it also provided a peek behind the curtain at who Ashley J. Williams (Campbell) truly was. Perhaps its greatest achievement, though, was getting a die hard fan base to fall in love with characters it had never known before 2015.

THE EVIL DEAD premiered in Detroit, Michigan on October 15, 1981, with origins that stretched back even further, but didn’t introduce Pablo Simon Bolivar (Ray Santiago) and Kelly Maxwell (Dana DeLorenzo) for 34 years, and it would be another two before Brandy Williams (Arielle Carver-O’Neill) entered the fray. By the time “Mettle of Man,” came to a close, however, they were just as beloved as El Jefe, a testament to the writing team that brought the show to life.

James Eagan was responsible for 11 episodes, while Nate Crocker, Zoe Green and William Bromell all had a hand in penning 10 chapters. DeLorenzo was and continues to be a champion of the team effort responsible for making Ash vs Evil Dead what it was, and never was that more evident than the series finale. Campbell, Santiago, DeLorenzo and Carver-O’Neill assembled in the back of a military truck, armed only with Rick Jacobson’s words (Jacobson wrote and directed the final two episodes), and provided EVIL DEAD fans with the farewell we needed, but didn’t deserve.

On that same commentary track, Campbell said “This is very potentially the last time you will ever see these characters, and story-wise, we’ve been through too much to give them short shrift, as they say.” A concept Jacobson understood as well as the most ardent of AVED fans.

With a six-story, Kandarian demon looming in the distance, the Ghostbeaters all remained true to character.

Amid chaos and gunfire, Pablo rushed to rescue a frightened little girl cowering on the street, Kelly picked up a weapon and defended the soldiers facing off with oncoming Deadites, and Brandy held tight to the ride or die stance that put her firmly at Ash’s side.

And as the Godzilla-like monster roared and the blades of a helicopter whirled overhead, the Prophesied One glanced at the faces of his family and “finally, for once, own(ed) up to who the hell [he] was.”

Brandy questioned what he was doing and Kelly barked “Ash, come on. Get in the fucking truck!” but Ash knew that nearly four decades on, the time had come. And Campbell, along with his partners in crime hit every note Jacobson had poured onto the page.

“My father always said I ran from my fights, Brandy. I’m not runnin’ from this one.”

As NYPD Blue methodically unveiled the soul of Andy Sipowicz (Dennis Franz) over 12 seasons, so too did AVED reveal that Ash was not only the hero we always believed him to be, but that he was no longer a caricature, rather a human being willing to lay down for those he cared about.

As Jacobson commented, “[Ash] knows that most likely, [his decision] was going to be a one way trip.” For the first time, it was not one-liner that left tears in our eyes, but the heartfelt emotion Campbell exuded saying goodbye.

Like a father stingy with a compliment, Ash picked the perfect time to show the Ghostbeaters how he truly felt about them.

“Kelly, people are going to need a strong leader. Someone they can depend on, someone they can believe in. That’s you.” Maxwell, the focused leader to Ash’s reluctant, fly-by-the-seat-of-his-pants Chosen One, finally knew that she didn’t have to be like Ash, that who she was was exactly what the world needed.

Turning to El Brujo Especial, “Pablo, you’re the Jefe now.” A quick cut to Ash’s right-hand man found his orbs moist with sentiment, but he said nary a word, just pursed his lips with a pained smile and nod of understanding. Nothing needed to be said. Perfectly written and perfectly acted. I’m not ashamed to admit that for all the times I had to pause Ash vs Evil Dead because I was howling with laughter, that reaction shot was the only time I paused it because I was overwhelmed. It was a good minute or two before the tears had stopped.

“You save them.” Once more, it was no longer about Ash or even those he held most dear, but the citizens of Elk Grove and the world at large, because the savior of humanity was finally ready to fulfill his destiny.

But not before parting ways with the daughter he’d only begun to know, but loved deeply.

“You said you wouldn’t leave me.”

Holding back tears, Ash responded “I’m doin’ this for you. I’m doing it for all of you.” Brandy placed her hand on the window, and Ash answered in kind, his head bowed, and a gentle, loving double tap of his fingers on the glass. As the truck pulled away, we saw Ash standing alone as the camera widened the distance between them.

It’s been a year since we said farewell to Ash vs Evil Dead, but much like Ashley J. Williams, those final fleeting moments when Rick Jacobson’s words were shared between the Ghostbeaters will stand the test of time.