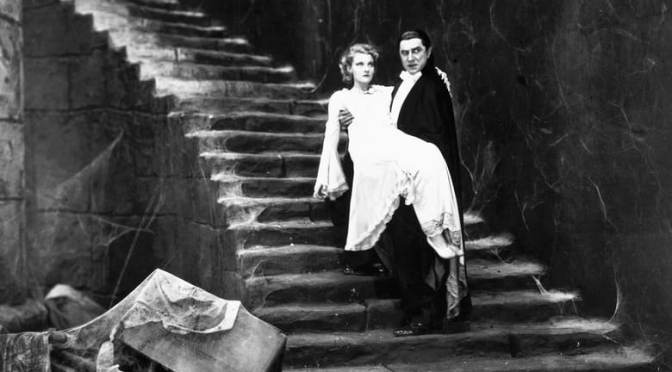 In honor of Bela Lugosi’s birthday (A day late I’m afraid, but better late than never), I’ve sat down to treat myself once more to the fantastical whimsy of the horror film that really started it all, Dracula. No denying the German expressionism films were the pioneers of horror cinema, but Dracula was the very first ‘talky’ horror film.

The fog crowded scenes and hypnotic visuals of the Count’s foreboding and far-away realm could now be heard as well as seen, and they used sound to their advantage for this eerie new project. Rattling carriages drawn by horses, creaking doors, and hissing bats. Audiences sat dumbfounded by all they heard. It brought the night-shaded horror of Transylvania straight to them. And there was no escape. Horror had entered a brave new era.

There was no going back. Dracula opened a secret door and a monsoon rush of sensational horror films has flooded through ever since.

From the cracking whine of a camera in Texas Chainsaw Massacre, the tolling of the bell in Hellraiser, a sing-song lullaby in Nightmare on Elm Street, and, last but certainly not least, the iconic sound Jason makes all stand out in our blood-splattered minds. These sounds immediately take us back to the chills and thrills of the films and are as iconic as the monsters we love.

Dracula began it all.

It’s so easy to get wrapped up in each little minute detail of the film, but I’m no expert on the matter, just an avid fan. Somehow rewatching it this time around reminds me of the first time I ever sat my butt down to experience this macabre treasure.

Any of you remember those drop-dead sexy VHS covers Universal released a few decades back for each of their Classic Monsters library?

One Halloween my mom got me both Dracula and Frankenstein, both of which I’m still proud to say I still own

I was in 1st Grade and Castlevania had just released earlier that year and was my favorite game. Mom thought it was high time her little Manic watched the very original Dracula movie. I’d seen so many different movies with Dracula in them but never the initial film. That Halloween all that changed.

I don’t think I moved or fidgeted once. I may have not even blinked! I was transfixed to the glowing screen, it being the only light allowed to remain on, as the living shadows of this gothic epic played out spectrally before my eyes. Sure I was a young kid but the film’s unique majesty and gripping narrative weren’t lost on me.

To The Prince of Darkness

Now at the end of Bela Lugosi’s birthday, I lift a glass to his eternal legacy. A cheer of thanks and of memories to him.

Against the odds of English not being his native tongue Lugosi pain-stakingly pronounced each word spoken with adjective deliberate concentration. It gave the Count his often mimicked manner of speech and deepened his mesmerizing effect over horror history .

So the imitated accent of Dracula was in fact Lugosi’s Hungarian one. It served the part well.

Lugosi was not the first choice for Dracula, nor was he even the second. A fact that pained the actor considering how he’d played the part on stage and mastered the role to damn near perfection. So when the time came for him to don the vampire’s cape Lugosi fought and earned his right to bring Bram Stoker’s legendary nosferatu to cinematic life.

As grand and wondrous as he is in Dracula that’s not, in fact, my favorite of his various roles. That honor goes to his hideously fun part in Son of Frankenstein where Lugosi ditches the cloak for a huched back. Playing the nefarious Igor, Bela Lugosi shines and steals the show!

I feel that Igor allowed the man to show his more playful side. Even though his face is hidden beneath a ratty beard and layered of makeup the man can’t help but bristle with fun and life. He never loses that sinister sparkle in his beady, little eyes nor that vicious smile.

You know what? Stop right here. If you’ve not seen Son of Frankenstein then I insist you go do yourself a favor and correct that right away, my Nasties. Go watch Uncle Lugosi have the time of his life!

Bela Lugosi had both magnetism and charisma. Not unlike the genius of Lon Chaney before him, Lugosi could captivate people on a whim.

Those who knew Lugosi said he carried an unearthly mystique about him. He would enter a room and every eye would gravitationally be drawn to him.

He was indeed Dracula, so much so that he was even buried in a cape echoing back to his most treasured role.

Hope you’re enjoying this witching season, my Nasties. And I hope that in your Halloween movie watching you have a chance to pay respect to Lugosi’s devilish spell over horror history.