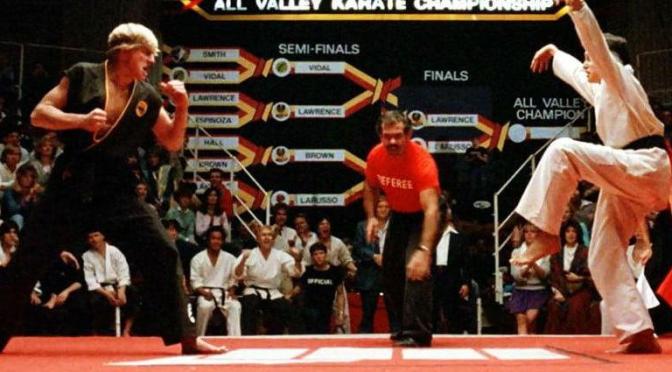 Daniel is showing Johnny no mercy with a load of trash talk in new Karate Kid series, Cobra Kai.  I guess some rivalries never really get squared away!

Recently, Youtube Red released a full-length trailer for the upcoming 10-episode series Cobra Kai. Which continues the story from the original 1984 Karate Kid film 34 years later starring the loveable Daniel (Ralph Macchio) and former Cobra Kai douchebag Johnny (William Zabka). As we’re all aware, time changes people, and from the looks of the trailer, it seems that we have a clear situation of role-reversal here setting the stage for what may be, the All Valley Karate Tournament rematch we’ve all been waiting for!

If you recall from the original film, Johnny was told to sweep the leg. Now sure, Johnny was a total dick throughout the whole movie. However, he clearly expressed hesitation in further harming Daniel, especially with an illegal move.

But hey, a kick to the face is totally acceptable, right? In the film, the rules in the tournament state, “Everything above your waist is a point. You can hit the head, sternum, kidneys, ribs.” Ok, cool. But, if this were based on a real match, Daniel would have been disqualified himself for such a hard blow to Johnny’s mug. Not trying to start some shit here. Just stating science facts.

Anyway, back to the series. The trailer opens with the kick heard around the world back in 1984. We then fast forward 34 years later (geez that makes me feel old) to a presumably down and out Johnny walking into a car dealership owned by none other than his former high-school punching bag, Daniel Larusso. And to be quite honest, Daniel is pretty much a total dick to him. Maybe he deserves a little ragging, maybe not. That’s not for to decide. Either way, it’s pretty hilarious in any regard. However, it’s clear without Mr. Miyagi around anymore, Daniel is struggling to find his balance in life.

Cobra Kai crane kicks onto Youtube Red May 2, 2018. Will you be watching this old rivalry come full circle? As long as there’s more trash talk, I’m all in!