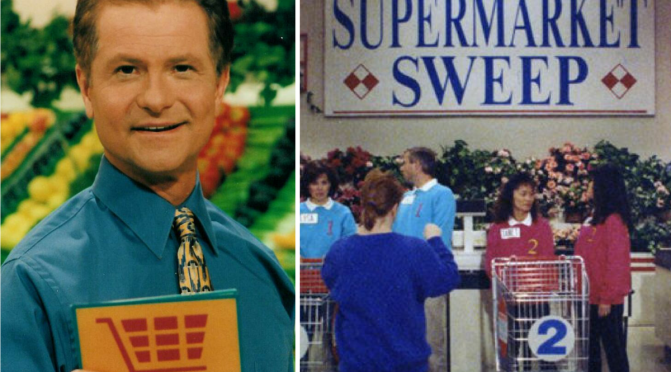 Attention shoppers! If there’s one game show that most people remember from their 90s’ childhood, it’s most definitely Supermarket Sweep. The show wasn’t made for kids per se, but who the hell didn’t think running around a faux grocery store throwing mass amounts of gourmet golden hams and 4 foot long salamis into a grocery cart looked like fun? It made that boring weekly trip to Smiths with your mom a little more exciting. Admit it. When no one was looking and the aisles were clear you ran down that son of a bitch slam-dunking Planters Cheez Balls in the cart fantasizing that you owned every single cool sweater David Ruprecht owned.

Ok. Maybe that was just me. But in all seriousness, and from the mouth of the man himself, Ruprecht was the Imelda Marcos of 90s’ sweater fashion.

But no matter how big a fan you are, there’s still some fun things about the beloved show that might come as a surprise to you! Let’s dive into some behind the scenes facts you may have completely forgotten, or didn’t know all.

Supermarket Sweep is older than you think

Sure we all know the nostalgic, Lifetime aired 90s’ version. However, it wasn’t the first! Supermarket Sweep actually dates back all the way to 1965 first airing on the ABC network. With host Bill Malone, the premise was the same of three pairs of contestants running around like madmen. Men being the keyword here as typically the females handled the trivia part of the show while their male counterparts did all the messy shopping. Gotta love that 1960s’ stereotype bullshit.

Anyways, instead of being filmed on a set like the version we all know and love, the 60s’ game show was shot in actual grocery stores! And they actually got to keep their groceries! If they didn’t win top dog in the game, at least they ate good for a while!

Some of the food on the shelves were rotten and spoiled

Albeit most of the food used in the popular show was indeed fake as fuck. Oh yes. Those golden yams were just plastic blobs of plastic my friends. However, it didn’t start out that way. According to former host Ruprecht, those hot dogs in the sweet sweep were absolutely disgusting in an interview with Great Big Story.

“We shot for about five months, six months every year, and they used the same food over and over again. So by about the third month, the hot dogs had sort of started to ferment in the package and the package swelled up. And a lot of the food, having been thrown in and out of carts for three, four months had gotten pretty beaten up.”

Maybe it was after someone finally blew chunks from the smell from some of this stuff, they ultimately did away with any and all real products. Even though you and I know nobody was packing hot dogs in their cart as that would be fruitless in advancing your cart score, someone had to have noticed that nastiness at some point.

Those sweet contestant sweaters were offered as consolation prizes

Listen. I can say with full certainty that I would take one of those sweet Dad style sweep sweaters over a lame cash prize day any day! I hate to call them “losers”, because I’d be winning all day in that damn thing. However, contestants that didn’t move onto the $5,000 big sweep game, had that choice to take a cash prize or keep that sweaty, cheap sweatshirt that may or may not have reeked of spoiled hot dogs.

Who cares. Give me that high fashion rag please.

That supermarket was a lot smaller than it looked on TV

Well honestly, I was definitely fooled upon learning this myself. A former contestant spilled the beans to the A.V. Club that the actual market was “very tiny.”

“A little bit bigger than a bodega in the city. It’s very tiny. It looks huge, but it’s small. Even in the aisles, you had to be careful if you and your cameraman were running and another group was coming down that aisle. You had to make sure you were all the way to the side or there could have been an accident.”

No, it wasn’t a Halloween special. This went on for a few episodes! I’m not sure of how long it lasted but in the earliest days of the Sweep, producers thought it would be hilarious to insert these wild characters deemed “market monsters” into the grocery ransacking shenanigans to scare the shit out of the contestants.

From the likes of giant gorillas, Frankenstein, and a fellow called Mr. Yuk that actually kind of looks like a Kroger rip-off of the Pale Man in Pan’s Labyrinth (seen above), these guys made another goofy addition to the game show that ended up getting scrapped entirely. Below is a full episode from the glorious Youtube that features a Market Monster that I can only best describe as the ugly offspring of The Gobbeldy Gooker. *You can check him out at around 13 minutes in.

Now if you’ll excuse me, full episodes of this majestic game show are indeed streaming on Amazon Prime for free. So I’ll be down that nostalgic rabbit hole for the next three days. So the next time you’re at the market register and you hear that beep, think of all the fun facts you learned from Nightmare Nostalgia’s article on Supermarket Sweep!