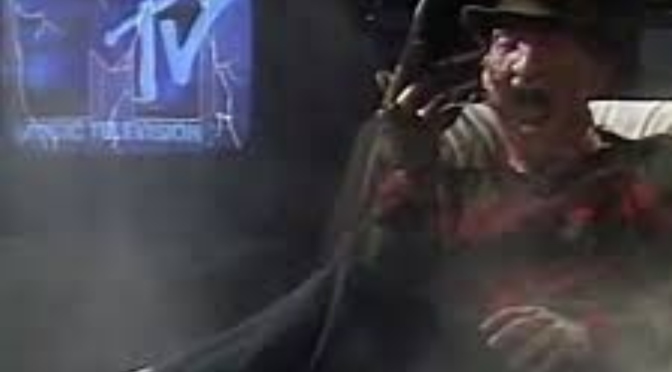 In the year of our Lord, 1988, Freddy Mania was at its peak; running wild among the youth of a generation bringing the horror genre into homes mainstreaming and normalizing it. Between several hit films, an upcoming TV series (Freddy’s Nightmares), and bootleg toys, Robert Englund had to have been on cloud fucking nine with his megastar horror icon status. While one could argue that you know you’ve really made it when someone makes a flimsy bootleg action figure out of you (Thanks Nightmare Feddy), the 80s’ holy grail of true fame came when MTV beckoned.

So let it be written. SO LET IT BE DONE.

MTV went balls to the wall promoting the hell out of A NIGHTMARE ON ELM STREET 4: THE DREAM MASTER with an all out hour long special featuring Freddy himself with music video clips, scenes from the film, and of course Freddy playing cat and mouse with a bumbling MTV VJ (Kevin Seale).

While I can appreciate this for what it is, and honestly who the fuck doesn’t? The music video blocks in the special were just weird and random as hell. We go from Alice Cooper’s ‘Welcome to my Nightmare’ and Dokken’s ‘Dream Warriors’ to ummm… OWNER OF A LONELY HEART?! Then saving face with Ozzy’s ‘Bark at the Moon’ and the infamous Fat Boys’ ‘Are You Ready For Freddy?’ to wrap it up with PETER GABRIEL’S ‘SHOCK THE MONKEY’.

It’s honestly hilarious to me how random, or maybe not so random they mashed these videos together for a Freddy Krueger epic. It could very well be some of the PR of these artists wanted to reach a younger generation so lets shove some Gabriel and YES down their chops in between Kruger slashing up some MTV VJs.

In any case, these types of specials are a thing of the past and I have no gripes. It is of course, funny enough to mention about the music vids and the over-the-top acting. However, it is goddamn magic and a staple of a time where this was our normal. I only wish this sort of glorious cheese would make a comeback. We need Freddy more than ever in 2020. Uh, well, cinematiclly speaking.

Speaking of which, the entirety of this special was a HUGE pain in the ass to dig up on the wide world of the internets. I would imagine the company WMG, who owns the rights are being salty about the content being uploaded. However, I managed to find the WHOLE DAMN THING thanks to a fellow website who gets full credit for this beauty- Timid Futures– who gathered its source from TheNextKrueger. And the cycle lives on here at Nightmare Nostalgia.

Enjoy it now as we can only hope this video doesn’t get flagged!