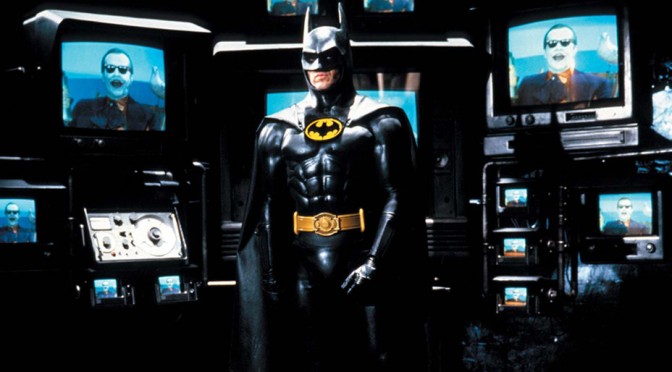 The iconic Superman (1978) movie by Dick Donner (Goonies, The Omen) was the only example of how one could actually work successfully.

But that was back when our parents were young and we’d already watched all the Superman movies to death. Even the stupid ones.

Ah Hell, I was so starved for comic book movies I even made myself like the Supergirl one. Hmm…looking back on it I guess Swamp Thing was a comic adaptation too. But Uncle Wes’s boggy hero was more like a fun monster film. No iconic caped heroes or cities to save from evil.

Then – like a bat out of Hell – came this teaser that dropped like a glowing nuke straight into our backyards!

No one was ready. No one had a single god damn clue this was even in the making. Our miniscule lives were about to change forever because out of nowhere rumors of a Batman movie surfaced and a storm of interest grew quickly into a hurricane of excitement!

Oh but then people saw the trailer and – as far as fandom was concerned – there was no going back.

We were entering a whole new era of gods and monsters, one of capes and imagination grander than we thought could ever be possible! Of heroes and villains so delightfully dastardly that we couldn’t help but fall in love with them.

The Bat was on his way and Batmania was on the rise!

It’s a fever that persists to this very day as fans eagerly await Snyder’s cut of the Justice League and the upcoming The Batman.

I shit you not once people found out a certain movie playing had Batman in its opening trailers they bought tickets just to go watch the trailer. Then they’d walk out of the cinema.

Some did it more than once because the hype surrounding this film was that imperial. It’s not like we had YouTube back then, and, supposing we did, it would have taken three weeks just to upload a minute-long teaser thanks to dial-up. But you better bet your ass we would have waited those three weeks (gladly) just to watch this thing!

Cinemas were swarmed by fans just to get the tiniest glimpse of the Dark Knight of Gotham and the Clown Prince of Crime.

Mainly because this was a Batman more akin to the Alan Moore and Frank Miller comics than to the campy fun of Adam West and Ceaser Romero. Gone now was the ‘70s colorful glow of Gotham and in its place was a dingy capital of ‘80s angst and grit.

When Batman hit someone you didn’t need a great big ‘BAM’ to fly at your face to feel it. And the Batmobile – Oh my God still the sexiest damn model ever – roared down the glistening streets of Gotham as the Bat trailed down armed cars of the Joker’s crew!

This was a Batman like nothing we’d ever seen before.

The teaser introduced us to the new and improved (Joker products! HAHAHAHAHAHA) Batman. Nothing against the Adam West show, but this time around it felt like Batman was aimed towards the big kids. The cool crowd.

Batman’s teaser is the criteria of how movie trailers should be handled. It gave just enough glimpses to light a fire in our chests. Then it stoked the flames until we could hardly stand it.

We see Bruce Wayne in his everyday (boring) life, but then we see the Bat himself! He’s not a colorful and smiling do-gooder, but a dark and dangerous threat to the underbelly of Gotham’s criminal world. When Batman appears the bad guys are terrified.

Then Batman enters a scene by smashing his way through a god damn ceiling window! By this point fans were cheering!

The teaser culminates with Nicholson’s Joker (in full and glorious makeup) threatening, “Wait until they get a load of me” and ends on an image of the Batman while Joker laughs that incredible laugh.

It showed fans just enough to hype us all up without giving away the whole movie, something too many modern teasers/trailers have not learned from.

Thanks to this teaser people didn’t want to see this movie. Oh no, that’s way too simple. People had to go see it. Like a spiritual craving, people rushed in droves to watch this film and came out of cinemas changed. They had to see it again, and again and with all their friends too.

I don’t need to tell you about Batman’s success. It’s history now. Without it though I highly doubt we would have Nolan’s triumphant Dark Knight Trilogy.

Batman, like Superman before it, proved the success these movies could enjoy if handled with passion and faithfulness to the material. The reason why there’s an MCU is because of the triumph of DC’s cinematic previous endeavors.

No one thought Batman (BOP, BAM, SLAP!) could be the top-selling movie of any year, but it was. It was even hailed the movie of the decade.

No one thought a comic book adaptation could be any kind of success. The Bat proved his critics wrong.

And the Batman remains triumphant to this day as his mythos is further explored and expanded upon for whole new generations.

For more Batman nostalgia be sure to click here for wicked moments that define the Joker’s life of crime and carnage!