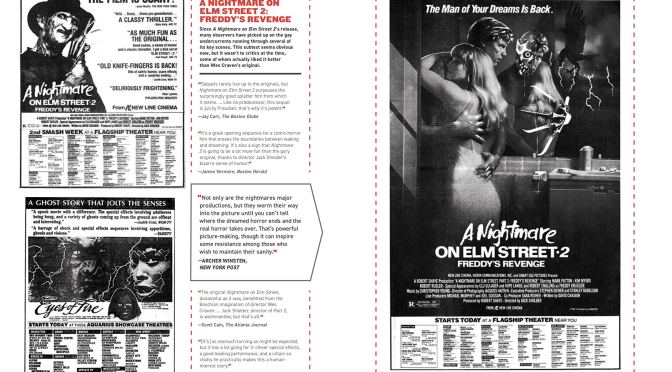 Once upon a time before the wild world of the interwebs, you had to turn to that black and white rolled up bunch of papers that magically appears in your driveway every morning to observe the latest movie premieres and listing showtimes. Plainly speaking, living in an advanced age of technology has spoiled us from giving in that extra effort as any and (almost) all information is literally at our fingertips. And with the entrance of Google, the exit of what is now considered a lost art occurred.

As with horror-based VHS art, newsprint graphics for film announcements became an entity in its own with not only promoting said picture but influencing audiences into seeing the movie with the alluring black and grey art attached to the information. Former Fangoria Editor-in-Chief and presently, one of Rue Morgue’s head-honchos’ Michael Gingold has taken this long-lost pastime and breathed new life into the forgotten advertisements with his new book, “AD NAUSEAM: NEWSPRINT NIGHTMARES FROM THE 1980s”.

I recently had the opportunity to gleefully gawk at the 245-page book and holy Nicolas National Treasure Cage- it is as glorious as the retro sunbeams beaming off a neon synthwave.

With all retro advertisements seen within, some extremely rare or never-before-seen all from Gingold’s personal collection, compiled into yearly chapters that range from 1980-1989, this truly is a must-have for not only lovers of 80’s horror, but ALL genre enthusiasts. From a historical standpoint, this nostalgic book certainly serves as an opened time capsule from a time where horror was both beloved and misunderstood by the general public- (If you’re questioning that last bit, check out this little diddy from 20/20). So whether you’re reliving that era or discovering it for the first time, the feeling you get as you flip the pages through these newsprint nightmares can easily be compared to watching your very first horror film. And that my friends, is such a rare experience to come across in the modern days of the interwebs.

In addition to the glorious spread of page after page of retro goodness, snippets of reviews are matched alongside select films. It goes without saying this was a time where Rotten Tomatoes and online reviews were years ahead in the future. That being said, in a time where horror didn’t harbor the respect it has accumulated from critics over the years, you’ll find a few of these snippets might just trigger your horror senses into a flight or fight reaction. As explained in the book, these reviews were posted at the time of release, and I’m just taking a shot in the dark here, from a few snooty film advisers.

However, I can overlook those very real reviews with an extensive introduction from Gingold explaining what had compelled him to save all these clippings to begin with. If you hadn’t already taken the hint or looked around at my website here, I kind of really love reminiscing about my journey in and around the horror genre and the influences it had on me as a child; but hearing it from the mouth of someone who is hugely respected here, and around the horror writing community is pure gold. And I highly urge everyone in this business that picks up this gem to resist the temptation and read what Gingold has to say before going balls deep into the ads. VERY IMPORTANT HERE.

Towards the end of the retro 80’s horror ad road, you’ll find an intriguing closing entitled “The Art of the Sell”- which includes conversations with Terry Levine (President of Aquarius Releasing), and longtime partner and artist Wayne S. Weil who dive into the drive of these ads and putting “asses in theater seats” via these said newsprints.

As you may have gathered already, this book is a definite must-have centerpiece for your house of macabre’s coffee table for any collector of physical horror media. It is both highly stimulating for your retro horror senses, and a wonderful journey of film history through the decade where horror shined like no other era. The book drops tomorrow on Amazon Prime and you can pre-order it here at a discounted price, or directly from 1984 Publishing to obtain a signed copy.