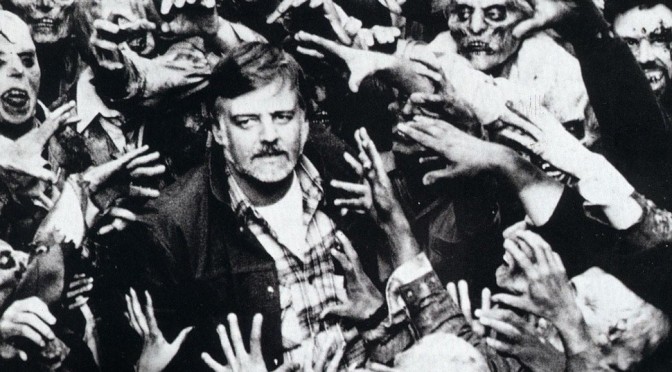 Welcome back my little nasties! Just can’t get enough of the dearly departed, now could you? Well, that’s perfectly alright with me. I love the dead too, don’t you know? Oh and what a maggoty treat have I in store for you this time around!

Today we’ll be delving even further into the dripping depths of this rancid crypt of  living death. The worm dieth not here as we expound upon the very threshold of Hell’s widening maul. The lights are dim and Death is restless as we take a look back at two extraordinary horror masters and the connection between both of their nightmarish visions. The original infection that began in the mind of George Romero spread across the globe to mutate in the fetid imagination of Lucio Fulci, and zombie mania became unstoppable thanks to both men’s fiendish contributions.

In The Beginning, There was NIGHT

The late George Romero managed to do something few creative minds in the field of horror ever have the good fortune to accomplish. He invented a new monster, a monster that tore away taboos and desecrated the sanctity of the restful grave. Without explanation, the dead rose from the cold soil and stalked friends, lovers, and family without prejudice. We, the unfortunate living, were prey for a fresh new nightmare, a nightmare that took the globe by storm and essentially gave way to an entire sub-genre. That same sub-genre persists to this day with no sign of hesitation in sight.

It should be noted that Paw Paw Romero was well aware that zombies had already appeared in cinema. However, those zombies were worlds apart from what we now know them as. Growing up, Romero saw movies involving Haitian zombies, men or women, unfortunately, who have fallen victim to some very dark voodoo magic. They were will-less slaves lumbering about with wide-eyed abandon to serve their master’s beck and call.

Did Romero intend to reinvent these helpless creatures? Aw hell no, and he would be the first to correct us should we argue any differently. George Romero did not set out to create a zombie movie, but rather he wanted to create a whole new kind of monster – ghouls! Being the learned man that he was, Paw Paw Romero was quite aware that ghouls in folklore were known to haunt mist-shrouded graveyards and feed their sensational gluttony among the dead. It was his genius to bend the rules (just a  little bit) to his own liking and make the ghouls of his movie be the actual dead freshly risen from the graves and set about with an insatiable craving for warm human flesh.

With that idea in mind Night of the Living Dead was made and a new genre was begotten. Romero’s ghouls were an instant hit as audiences screamed their lungs out and watched under a veil of tears as the victims on screen desperately fought a hopeless battle for their very lives, with increasing fever to just survive the dire night of merciless carnage.

Audiences embraced Romero’s monsters, but with one condition. By and large, people accepted them as zombies and not as ghouls. Ask most people today and even still they’ll say it’s a zombie movie. I’ve never really heard Romero had any qualms with that either. His vision was a success and he did accomplish creating a new type of nightmare to scare us shitless.

With the insistence of fellow horror genius – Dario Argento (Suspiria, Deep Red) – Romero was invited to Italy where he would sit down and lay the groundwork for what many (even still to this day) consider the greatest horror movie of all time – Dawn of the Dead. For many fans, Dawn of the Dead became their favorite scary movie, and for good reason. The movie includes a little bit of everything for anyone.

Relentless, cruel and still good-natured, this was Romero’s answer to his original vision of dread. The movie would be in color this time around meaning all the blood would be quite noticeable. It would also feature the ingenious work of special FX legend, Tom Savini who has spent a lifetime exploring ways to show us death in the most visually violent ways as possible.

Romero welcomed us all to the Apocalypse!

From the very opening scene, Romero impresses upon the audience a world that has lost all control. We are introduced to the Apocalypse from a news broadcasting room livid with very real human reactions. The movie wastes no time and drops the viewer into this world where you now must follow a band of characters who are ill-prepared to deal with the world’s ending at the hands of the zombie plague.

This isn’t something anyone can prepare for, and it certainly proved to be something no audience at the time was prepared to handle. Savini’s gruesome work splashed across the big screen like foul art, a thing no one wanted to see but nobody could look away. It was a violent array of popping headshots, flesh-eating, and ghoulish fun.

Romero struck gold and genre fans couldn’t get enough of the simple formula he used.

This formula is repeated even still. If you’re a fan of The Walking Dead or Resident Evil you have George Romero and his Dawn of the Dead to thank for that. Once again, the man reinvented himself and the monster he brought to life.

The Italian Echo of Living Death

When Dawn of the Dead was released overseas, in Italy the movie was simply titled Zombi. The film had a definite impact on one particular viewer – Lucio Fulci.

It’s been said that the screenplay for (what would become) Zombi 2 was written before Romero’s classic DotD was released. What is fact though is Lucio’s movie served as the unofficial sequel to Dawn, or Zombi, and hence the name Zombi 2.

Fulci’s contribution is brilliant. This is not some half-assed movie either, something quickly cooked upped to cash in on an internationally acclaimed hit. This movie has heart, a swollen, blackened heart beating with putrescent awe and terrible beauty.

A few years ago Shriek Show was kind enough to releases an incredible 25th-anniversary edition of Lucio’s cult classic. This is the edition you’ll want to pick up if you’ve not seen the movie, love zombies, and have even the smallest bit of interest right now. To be honest this is my all-time favorite zombie film. Yup, even though I love Paw Paw Romero, Zombi 2 is my favorite out of all the great many zombie flicks to choose from. When asked why I always refer to one simple reason – this movie has everything I’d expect out of a zombie film. Lots of gore is a given, as well as actual visuals of the dead themselves rising from their graves. And these are rotting zombies too, so foul you can almost smell their ripe decay. Not to mention we get some pretty ladies running for their lives and heroes who don’t really stand a chance. This movie is chilling of its own accord and the slow pace build up is powerfully executed. 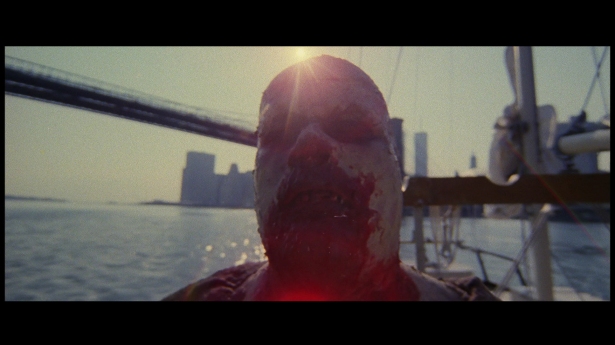 The one scene that stands out most to me – and if you know this movie you’ll probably already be guessing which one, but you’d be surprised to find you’re wrong – is what I call the’ zombie picnic’ scene (not the shark scene, although it’s also amazing). It’s just a scene featuring some zombies seated around a freshly dead victim. Her body is in oozing pieces. Blood is pooling everywhere and the living dead help themselves to the meaty morsels of her organs and muscles. Like I said it’s a great (and chilling) scene. One that takes a moment, hits pause on the action and just focuses on why we are afraid of zombies. We fear them because they feed off of us. Your spouse, your children, your best friend, should they die, will come back with a need to feed off of you. Or you, should you go first, will ultimately eat your own loved ones. That is the terror of zombies, that inescapable march to the grave, and not even the grave is safe anymore thanks to them. Weirdly it’s sometimes overlooked in so many other zombie movies.

Now, wait, if we take this seriously, that would make Dawn of the Dead, Zombi 1. Sooo would that mean Night of the Living Dead is Zombi the Prequel? It’s kinda fun to let that be true. To imagine these movies are all connected. (And Disney tries to act like Marvel was first to do a shared universe)

There were follow up movies after Zombi 2 made its mark. We might get into those at a later time, but that’s going to be it for now. I hope you enjoyed our little visit with these flesh eating monstrosities. As always be sure to keep checking in to get all those warm thrills or eerie chills, all right here at Nightmare Nostalgia! I’m Manic Exorcism, and I bid you all farewell for now. Go while you still can, dearies. Hehehe.