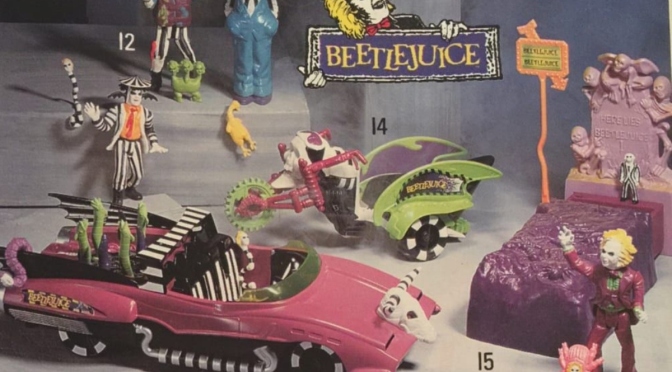 Like the majority of us adults, some of my favorite memories as a kid were the magic of the holidays. Sitting around watching glorious Christmas specials. Grandma’s magnificent Italian seafood dinner spread consisting of Linguini with clams, Clams Oreganata, and the classic eight-hour gravy for the non-fish folks (like me) with mussels on the side. AND of course, all the goddamn wonderful Christmas toys.

1990 was a banner year for some of the hottest toys and games on the market that holiday season. As we’re all aware, many toys are derived from pop-culture entertainment and with such films like Beetlejuice, Batman, and the explosion of the Teenage Mutant Ninja Turtles warping our minds on the heels of their late ’89 and ’90 releases, companies like Mattel and Kenner were in no short supply of marketing campaigns for the 1990 Christmas catalogs.

In full disclosure, I never write about what I can’t either recollect from my own memories, or fill in from other family members so every damn thing on this list is something I or my brother either received for the holidays that oh-so-far-away-feeling of 30 years ago! So if there’s something you’d love to add to this list, by all means comment below and tell me about YOUR favorite Christmas toy from 1990!

Oh man, I vividly remember receiving this dancing delight under the tree that year. My Pretty Ballerina was a beautifully made doll made by TYCO that twirled around in a circle and walked around on her tippy toes along to her cassette and dancer pole (heh) that came with each doll. Although she was stunning in her little pink tutu and fun to play with, she was NOT a doll to sleep with at night as I ALSO vividly recall nearly poking my damn eye out with that rose glued to her hand.

Red Ryder ain’t got shit on My Pretty Ballerina.

Playmates and Croner weren’t messing around with the blockbuster release of the first TMNT that year and OF COURSE went balls deep in creating another line of figures for the holidays. This year in particular harvested a RIDICULOUSLY extraordinary amount of turtle merch, including Undercover Donatello there along with Samurai Leo, Surfer Michelangelo, and Space Cadet Raphael. Along with an abundance of vehicles and playsets, let’s highlight the radical Party Wagon in particular.

Oh man, that Kenner line of Beetlejuice toys were unbelievably fun to play with. The “Ghost with the Most” dominated holiday toy competitors in 1990 along with TMNT a year after the box-office theatrical release of the film. And with the various strange and unusual pieces you could buy adding on to your collection, it wasn’t hard to see why. While there were many options to choose from in the line, The Creepy Cruiser was the holy grail of Netherworld vehicles in 1990.

By the way, check out my Welcome Page– I still have my talking Beetlejuice Kenner doll in the original box! It’s no creepy cruiser, but let me just have this moment.

If you weren’t hangin’ tough with one or ALL FIVE of these Hasbro produced figures of the biggest band of 1990, you were nothing and may as well never leave your house again. Well, according to nine-year-old-girl logic anyway. And you better have that stage, mics, and the phone too. Also, having those interview cassettes that came with each doll pretty much drove your playground points up as well.

Like Beetlejuice, yet another historical, nostalgic film of 89′ launched a toyline that exploded in 1990. The almighty Kenner was responsible for the glorious Batcave, Batmobile, and figures that some of us still treasure to this very day. I have to admit, when my brother got the Bat Jet and JokerCycle under the tree that year along with the Batcave he already had obtained for his birthday, I snatched that thing and was shooting that Joker face off at everything I possibly could-including my poor brother’s face, heh. Meh. I was a jerk big sister but weren’t we all!

Listen, our household took wrestling very seriously. So much so we had a GARBAGE CAN full of these guys! Every single one was obtained and the answer is yes- we had the ring as well which made for some great Royal Rumbles. Hasbro marketed these guys well as we weren’t the only kids dashing to Toys R Us for the new Ultimate Warrior variant.

Nintendo still hot on the market along with the infamous Nintendo World Championships of 1990 throwing the company into legendary status with our generation, Dr. Mario was released for the NES just in time for everyone with a system to put one on their holiday list. The 215 stage game for the pre-med puzzle thinker was a Saturday well spent in my childhood!

And speaking of Nintendo…

Ahh the good ol’ days when everyone was hooked on Dr. Mario and Tetris on the go with Game Boy! Technically, the 8-bit then sorcery phenomenon was released a year prior. However, it was still number one on a LOT of holiday lists that year and sales were booming; making last-minute parents run around like a dizzy ex-governor of California looking for one!

The Lil’ Miss line from Mattel ran from 1989-1993 with several different variants including a magic mermaid and the original Miss Makeup (which yes I totally owned). Along with this little jeweled treasure that I bet a lot of you forgot about! Bedazzling your doll and your own hair with that wand was all the rage at the beginning of the decade. However, pulling those Velcro jewels out of your ponytail hurt like HELL and would pull out your own hair if the jewels were to close to the roots.

Happy Holidays Nostalgic Nuggets! Comment below with your favorite toy or memory from that year! Or hell, any year! Let’s get a good nostalgic conversation going!