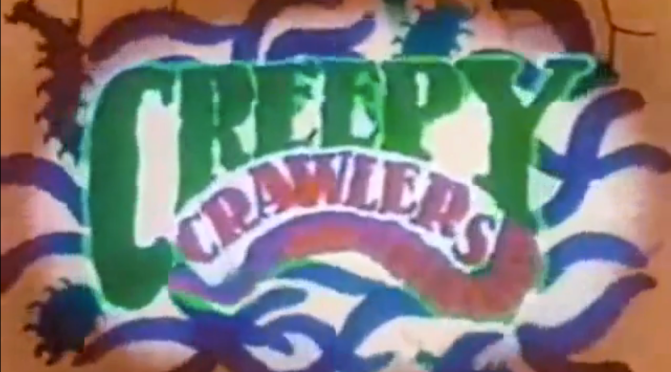 They’re slimy,. They crawl, and go splat.. splat.. and SPLAAAAAT!!!

There’s no doubt about it. Nothing sounds more nostalgic, (and frankly funnier than shit) than producing with your little hands, slimy bugs to set upon Dad’s forehead while he snoozes away on the couch once upon a lazy Sunday afternoon. The familiar freshly-baked Plasti-Goop smell all 90’s kids will instantly recognize is something we all collectively can agree was the jam back in the day. And it seems some things never change, as in recent news via Variety, Paramount has snagged up those slimy rights an official Creepy Crawlers live-action film has been greenlit for production!

Be still my gooey heart.

Anywho, yes nostalgic boils and ghouls. The testosterone infused Easy-Bake-Oven childhood relic is getting its own film from the same people who brought Goosebumps to life on the big screen. While that’s pretty much all that’s known thus far, I can (because I’m a positive thinker) make a fair assumption a similar formula may be followed and it’s going to be a fun piece of nostalgic entertainment. However with this in mind, did you know this isn’t the first time Creepy Crawlers has been adapted onto on-screen entertainment?

With the success of a certain rip-off concerning dino-mite, morphing Japanese superheroes, Saban Entertainment tried their hands in the animation department with, what else, the Creepy Crawlers line! I often wonder what these pitches in the writer’s room sound like to everyone else sitting around a table. Like, “Hey! You know that slime crap that bakes into bugs that annoys the crap outta parents?! Let’s make a series about that!” Then again, the glorious era we speak of was very keen to nabbing up R-Rated programming like Tales From the Crypt and The Toxic Avenger and making them kid-friendly for Saturday mornings. Man… did we have it made or what?!

The Creepy Crawlers series debuted in the US in October 1994 with the simple premise of goodies vs baddies. Except the kicker is, the Creepy Crawler hybrid monsters portrayed in the series were indeed the good guys! And of course, they had to have a pint-sized human sidekick to move the story along and enter humanoid kid Chris. The series kicks off with Chris who is fascinated by magic and wizardry, working in a magic shop under the kind of nutty magician Professor Googengrime. And yes, he looks just like you would think with a name like that. Anyway, the talented little Chris builds and develops something he calls “The Magic Maker”. Which of course, is supposed to mimic the Creepy Crawlers toy oven. Googengrime dismisses it as garbage but unbeknownest to him will be the source of power becoming the bane of his very existence. Now here where a show about mutant bugs gets weird: Once-every-thousand-years, a planetary alignment called by Googenbrime the Magical Millennium Moment, rains down cosmic energies. As fate would have it, these lights rain down on the magic shop, which somehow made the Magic Maker capable of creating strange, man-sized bug/magic trick composite mutant creatures. Enter the Creepy Crawlers mutants Hocus Locust, Volt Jolt and T-3 and now we have a series that pits the buggy monstrosities along with Chris against the evil Googengrime who duh, now wants the Magic Maker for world-domination purposes. More Creepy Crawlers hybrids came later in the series, however, the original three named above we’re the main focus for most of the series run.

Creepy Crawlers the Animated Series only lasted two seasons with a total of 23 episodes. I don’t think I’ve ever met anyone that remembers the cartoon with a nostalgic fondness and I’m not so sure why that is?! Personally, I think it’s a fun, run-of-the-mill Saturday morning gem that reminds me a little of early Teenage Mutant Ninja Turtles episodes. In any regard, I can always appreciate any attempt at basing a cartoon off of a beloved horror-themed product of our childhood.

Special shout out to YouTube uploader Bsh for posting the first full episode of the series! So if you’re interested in the origins of  buggy heroes, grab yourself a bowl of cereal and make Saturday Morning a party!