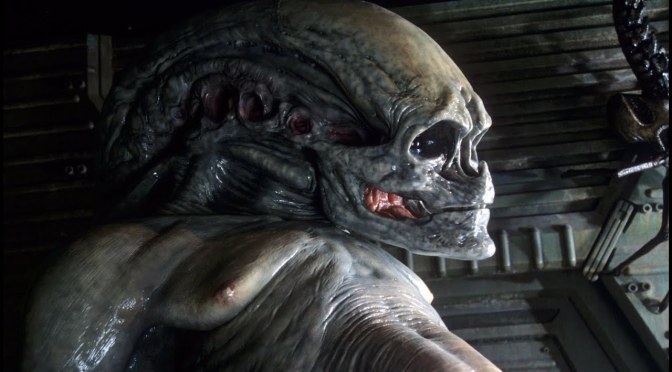 When it comes to the horror genre and motherhood, there’s no short supply of films that touch, or wrap an entire plot around the subject. From the age-old days of horror with films like Psycho to modern movies like A Quiet Place and mother!, the eternal bond between mother and child is ripe for storytelling in a twisted way for the genre. However, no movie, and as a matter of fact, the entire franchise has executed the theme of motherly love in such a beautiful and fearful way quite as the Alien films.

And I’m here to celebrate Ripley, Queen Alien mama, and that bastard hybrid-Alien child from Alien: Resurrection in all its glory.

From the beginning of the franchise, the theme of motherhood and birthing life into existence came as a punch to the face, or through an abdomen, if you want to get technical, with the thought of just how messy life can start from the get-go via one of the most infamous horror scenes of all time. As someone who went through giving birth twice, I can relate to those screams godammit; also, eh, yeah it’s pretty bloody and messy. It’s the most badass, metal thing a woman can endure, and our boy John Hurt got a taste of it on board the Nostromo with the systems operated by fittingly named, MU-TH-UR 6000- or just simply “Mother.”

Oddly enough in the 1979 film, the birth of life and what a woman goes through is shown through men rather than women; which, all things considered, one could perceive as truly groundbreaking. Sure Ripley touches on her own motherhood background and is a FurMom to Jonesy, but the ugly parts of the process are shown through Kane and Ash.

YES, ASH. This guy right here who bleeds milk and not blood. Sort of ironically beautiful don’t you agree?

To me, and many others whom I’ve discussed with this before, Ash represents that ugly Postpartum Depression no one ever likes to acknowledge exists for mothers. In the film, Ash is chaos with confusion and rage wanting to be in control. PPD is a beast in its own right and can only be tamed with a swift kick from loved ones. In Alien‘s case, Ripley is the one who kicks it in the face, and rightfully so as the heroine of the films’.

Ahh, Aliens. The sequel that many fans not only deem superior but mostly associate with via said theme; in which case, makes my job here fairly simple.

Ripley’s motherly bond with little Newt is undeniable in the wake of the loss of their own via the news that Ripley’s own daughter has passed on Earth and Newt now being the sole survivor of the alien attack on the colony. They both lost all they knew and just kind of gravitated toward that parental/child bond in both survival and therapeutic move; because mentally speaking, do what you got to do to keep your head on straight. So Ellen spends the entire film protecting Newt at all costs, but she’s not the only one protecting her baby.

The Queen Mother Alien is busy laying her own eggs all over the place, and while the little “buggers” hatch, Ripley and the rest of the crew are taking them down. Which, in turn, really pisses this Mama Bear off, and I can’t even be mad about that. In the same sense, Mama Alien also goes into rage mode trying to protect her babies, same as Ripley. While some the Queen as the villain here, she is cut from the slice of bread here as Ripley. Different species, same attitude. Don’t fuck with Mama Bear.

That’s right Ripley. You get what you asked for.

In Alien 3, Ripley finds herself alone again with everyone she knows dead, including little Newt. Well, not so alone actually as we come to find out that in Aliens, the enraged Mama Queen gave Ellen a parting shot by laying one last egg on the ship they escaped on to ensure her race would live on despite Ripley’s best efforts. With Ripley serving as the new host and Surrogate mother for the Queen’s baby, those motherly instincts go right out the window and we now head into the theme of abortion, which hey, is also a part of the whole parenting discussion.

What a savage move, eh?

However, the baby alien growing inside her does give her an advantage, as the Xenomorph which is loose on the prison planet can sense the Queen embryo; in which case, doesn’t want to kill or harm Ripley in any way. Kind of like, you can be pissed off at your family, but blood is thicker than water and you never resort to blows, seeing as how Ripley and the Aliens are somewhat related now.

In any regard, Ripley succeeds in aborting the pregnancy and the alien race future by killing herself, or so she thinks. Alas, not before both she is cloned making way for ALIEN: RESSURECTION.

It took 200 years after the events of Alien 3, but curious scientific bastards have finally done it. A xenomorph specimen has been successfully reanimated thanks to Ripley’s DNA samples while still having that Queen embryo inside her before her own suicide. However, in lieu of Ripley, we now have CLONE 8, who as an alien/human hybrid, is very enduring to her fellow alien relations in a way that only a mother would understand. As the saying goes, “a face only a mother could love”, Clone 8 makes that the understatement of the century with her own Alien/human relative. The Queen Alien clone taken from Ripley’s body surprisingly has a human reproductive system rather than laying eggs. Now the alien race can finally endure what a human feels while giving birth.

What a gift to give your child.

And what can be given, can also be taken away as Clone 8 has to come to a terrible decision regarding her own baby as it poses a serious threat to humanity. The hybrid alien that was birthed via the Queen clone, rejected its Queen mother in favor of Clone 8. While Clone 8 has some emotional feelings towards the creature, who I honestly think is sort of adorable albeit vicious, she uses this to her advantage by using the creature’s trust to lure it into a death trap in an effort to save humanity.

Motherhood isn’t all sunshine and rainbows folks. It comes with serious emotional baggage and tough, sometimes impossible decisions. Although I would HOPE offing your child isn’t one of them- leave that one exception to little hybrid mongoloid here. Ok and maybe, Henry from The Good Son. Seriously, fuck that kid.

Prometheus does a fine job of exploring the creation of life in a much broader way than even its predecessors. Serving as a prequel to all the Alien films, witnessing the evolution and understanding of the birth of both humanity, and of this strange alien race is a wild ride, much like motherhood itself. Instead of Ripley, we have Elizabeth Shaw, who has a strong religious faith and can bear no children. Again, focusing on another topic concerning motherhood that is brought to the forefront of the franchise: Infertility. With that in mind, some women find this problem frustrating and a toll on their own mental health and self-worth as a human. As Shaw clearly states in the film, “I can’t create life, what does that say about me?” Good to know that in the future this narrative of a woman is useless if she’s infertile, is still a goddamn thing.

Welp. Let’s just fix both those problems with an alien implant, shall we?

Prometheus tackles every single theme about motherhood within the Alien franchise and takes it full throttle even throwing in the modern, and now wildly used form of giving birth, c-section to boot. Gross. But cool, nonetheless.

With the final entry that is Alien Covenant, we come full circle back to the roots of the franchise with gender switching roles of giving birth, and David the android taking Ash’s PPD into full swing Post Partum Psychosis as he nurtures this race into a healthy existence at the expense of the human race. Even MU-TH-UR 6000 makes an appearance, bringing the franchise together in a twisted circle of life metaphor.

As a mother of two, I can wholeheartedly relate to every single motherhood angle the Alien films have thrown at us. Motherhood isn’t always easy, and the movies do a great job of hammering that aspect home. I’ve given birth naturally, through cesarean, spent a year struggling with PPD, and went through the trauma of abortion to boot. While I’m no expert, I can certainly feel all the emotions throughout the series; which I hold very dear to me. And it goes without saying, the Alien movies have done an even better job of being inclusive, making ALL mothers feel heard and seen. Whether you’re a parent struggling, infertile, a step or adoptive parent, surrogate, or hell, living the white picket fence family dream, (seriously who are you) then you can probably relate as well to the roller coaster of emotional and beautiful chaos that is motherhood.

A tip of the hat to all you Queens out there. No matter where you stand, you all deserve to be recognized.