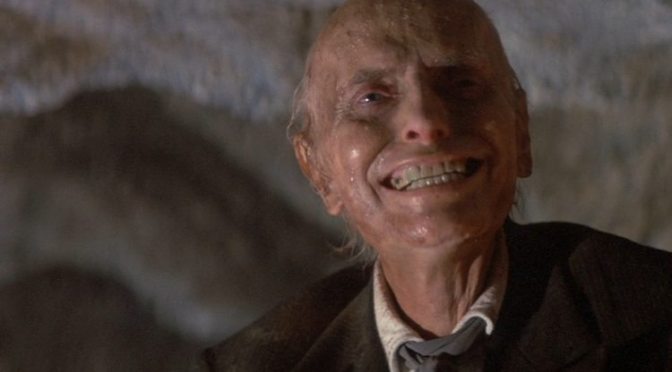 Nightmare Nostalgia Presents Creature Feature: An ongoing tip of the hat to some of horror’s greatest monsters throughout the genre that don’t seem to get the recognition they wholeheartedly deserve.

On the heels of a recent Poltergeist II movie anniversary and what would have been the 98th birthday of one Julian Beck, we won’t just tip any hat, but our oversized black felt-wool head-huggers and sing the gospel of all the “Holy Temples” to the man who gave everything, including his failing health, to a character that will forever be burned into our brains as one of the downright scariest in horror history.

Born on May 31, 1925, Julian Beck wore many hats in the entertainment business, not just the creepy pastor topper we’ve all come to associate him with via Poltergeist II. The on-screen preacher began his love affair with the arts and dabbled in painting abstract expressionist pieces in the early 1940’s until meeting his future wife, Judith Malina who had a tremendously immense passion for the theatre. The love-connection turned into theater history and the pair later founded the prestigious, and often controversial, Living Theater which focused on giving the audience an immersive and shocking experience to take home, reflect, and learn from. Beck, a self-proclaimed anarchist who on several occasions had plenty of trouble with the law, lived by the saying, “If one can experiment in theater, one can experiment in life.”  With close to 40 years of embracing these types of convictions inside and out of the theater, Beck’s finest hour came (kind of ironically), in the on-screen role as a passed-on pastor from another time who beat to his own drum as well. I’d say in a way more terrifying and psychotic manner, but you catch my drift here.

Keeping in horror franchise tradition, (although usually via accident-you never know if a sequel will follow) we normally don’t get a whole lot of backstory on the main antagonist. As a matter of fact, the name of Henry Kane was never mentioned once during the first film. Good ole’ Tangina warned of a malevolent presence in the home that she referred to as only, “the beast”. The Other Side, the follow-up four years after the original Cuesta Verde neighborhood nightmare gives us all the answers and a face to said beast with, of course, Julian Beck. And because of his creepy ass performance, I briskly walk a little bit faster past any senior living communities.

His soft-spoken demeanor could go from 0-100 real quick during his little temper tantrums, giving way to a visual about 8,000 teeth in the man’s mouth. Of course, I’m exaggerating a tad but I’d call you a liar if you didn’t think he had an extra set of chompers in there when his face twisted with anger. Besides angry dentures and walking around softly singing culty hymns, Kane’s dagger of a stare was enough on its own to make you avoid this dude walking down the street. Proving that an over-abundant amount of gore and make-up aren’t needed to give someone the skeevies. Not to take anything away from Kane’s other forms in the film including that incredibly EPIC H.R. Giger Tequila-Worm vomit monster (played by Noble Craig). But as Carol Anne said herself in Poltergeist III, “remember, less is more.”

Unfortunately, however, Beck’s look of a resurrected corpse throughout the film wasn’t movie magic but due to a 1983 diagnosis of the often fatal pancreatic cancer. Beck knew his days on Earth were coming to an end and gave everything he had to the role that launched his name into horror infamy. Often in pain on set, and if you look closely into his eyes via the clip above it’s painfully obvious, Beck used his unfortunate circumstances and threw himself into the role of the nefarious cult leader. Little Heather O’Rourke herself was so frightened by his unfiltered skeletal appearance, she burst into tears upon the pair’s first meeting.

I would have run like a bitch too sweetheart.

Today on the anniversary of the life of one Julian Beck, we appreciate his dedication to a role that was to be his last, and sadly never lived to see on screen. I can also appreciate that due to the Kane character, I’ve never wanted to open my door on a rainy day; especially to an elderly gentleman on the other end. Thanks for the eternal nightmares Reverend.