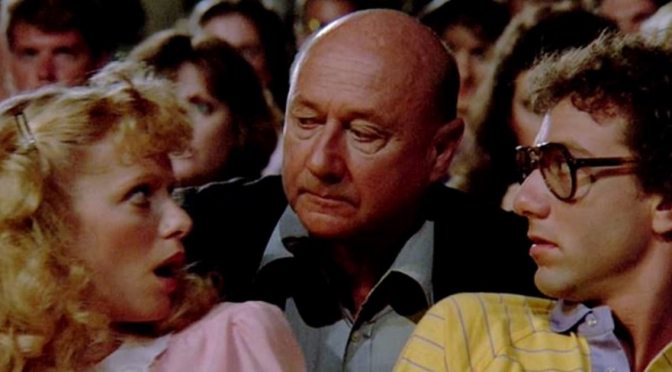 Many moons ago, I recollect curled up in front of our family Magnavox floor TV model and watching a collection of snippets from horror films with my Dad on a VHS rental. I couldn’t have been more than five or six at the time, however, this film of sorts we were watching stuck with me until today. As from what I can remember from said viewing was that this horror film special turned my curiosity on to a LOT of horror movies of which I may have never heard of prior; or at least not a few years down the line anyway. Movies like, The Thing, Carrie, and what I most visually remember Nighthawks– yeah I said it! And for YEARS, I (and apparently my father as well), couldn’t goddamn remember what the hell it was we watched! It was one of things that drove me crazy for about 25 years until I began blogging and journalism within the horror community and someone could answer the million dollar fuckin’ question. The film was of course, and correct me if wrong but also the FIRST of it’s kind horror complication documentary, TERROR IN THE AISLES.

Not even slightly joking. This shit drove me bat-shit crazy for half my life.

Released on October 26th, 1984, Terror in the Aisles broke the horror rules diving deep into what makes a great horror film in a mock documentary style way narrated by genre giants Donald Pleasance and Nancy Allen with snippets from landmark films. It was truly a one-of-its-own-kind experience as the setting is in a packed movie theater with the two legends seated amongst the crowd; which served as a set-up as certain members of the audience would ask questions here and there and one of the two would look dead straight into the camera and give us those answers.

The “doc” focuses on great moments in the genre history as well as leaning into sub-genres. It’s really a great commentary piece for both horror seasoned vets and newcomers to the community- even if all the horror clips date back to 1984 and prior. The films featured are pretty much the standard go-to’s; Halloween, Alien, The Exorcist and so forth with a few line-drives thrown; again, fuckin’ NIGHTHAWKS. Also, that’s totally ok because it’s a badass movie. As a young kid watching this, I DO remember asking about the films mentioned at the beginning of this article, and yes Nighthawks was number one because Sly was/is a hero of mine and I adored Rocky and Rambo as little kid. So yeah, Sly in a horror movie (kind of?), YES PLEASE.

Also, one of the scenes highlighted where Stallone is dressed in drag in order to trap the terrorist, wasn’t a sell to me but a total bonus.

TERROR IN THE AISLES is a fascinating time capsule from our generation. And certainly a fun revisit from time to time. Even if you think it’s corny or perhaps a cash grab milking the 80s’ horror money train from its’ time, you have to respect it was the FIRST. And set the bar for many of the horror docs and specials we have at pretty much, a forever disposal thanks to multiple streaming services and how huge the film community has gotten over the past 30 years.

The film was forever trapped on VHS for years up until recently SHOUT! Factory finally buckled for a glorious Blu-Ray release. However, if you want to revisit, and umm yeah I think you should, I would highly suggest purchasing the HALLOWEEN II Anniversary Blu-Ray, as TERROR IN THE AISLES is right there in the special features. May as well get a bang for your buck at a lower price am I right?

Sound off here in the comments Nostalgic Nuggets: What horror snippet from the film peaked your interests so that you had to watch that particular horror movie immediately?