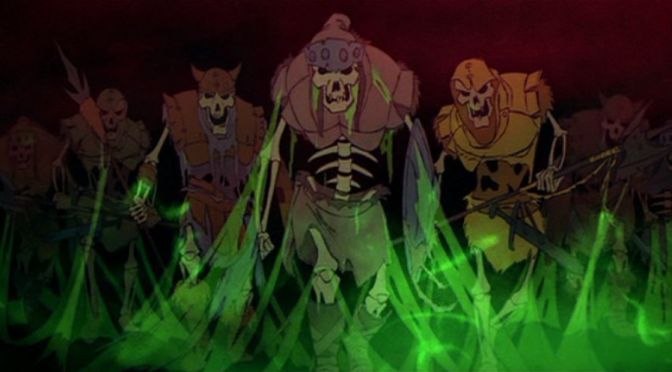 Think back to when you were a youngling. It was a time of the unnecessary belt with the leotards, the beta video, the jelly flats, and twisted people in the film industry trying to scar us with David Bowie’s huge bulge- Thanks for the unrealistic expectations Jareth. Let’s talk some Bill Nye and state some science here: Some of our beloved movies from adolescence had some pretty dark and twisted shit going on. And it scared the holiest of crap out of us.

It was damn glorious. They don’t make them like this anymore people…

Grant it, I grew up in a tough household where horror movies were thrown at me at an early age. It was, “sit down, shut up and watch Dream Master. Oh, and here’s an Ecto Cooler if you get thirsty”. The strange thing with that is this: Freddy Krueger NEVER scared me as a child. As a matter of fact, I thought the man was pure comic relief, even in the early films. However, there were times when I sat down to a watch a so-called family-friendly flick, and ended up thinking ” Ok, what in the actual fuck and why am I getting the skeevies by this?”  Those early films were pure nightmare fuel, and because this is Nightmare Nostalgia, let’s take a look below at this UNRANKED list of kiddie-gateway horror movies.

Alrighty, let’s talk about this 1990 twisted gem. Anjelica Huston successfully scared the piss out of me when I was a child as the Grand High Witch. Unmasked, she was something straight of a horror flick- bravo Jim Henson. The Witches is adapted from Roald Dahl’s book of the same name, and it’s important here to point out all of his books always bordered on a high creep factor. (Remember Augustus Gloop drowning a river of chocolate?) The story of a nation of witches who mean to bring an end to disgusting little “childrens” by turning them all into mice with enchanted chocolate, certainly made me think twice about buying that Hersheys bar. How’s that for a mind fuck?

Those goddamn bird creatures are the absolute bane of my existence. When Jim Henson strayed from his infamous Muppets, he ventured into a completely different realm of what the fuck. Especially to that of a four-year-old watching a gang of these hunchback birds called Skeksis, tear apart one of their own in a brutal fashion. Thanks for the sleepless nights creature shop.

The Secret Of Nimh

Animation is no exception and can be a whole tank of nightmare fuel.

An animal lover such as myself can find this movie extremely disturbing. Aside from all the beautifully dark imagery, the underlying tale of NIMH is sufficiently evil all on its own. Touching on the very real issues of cruel animal testing, rats and mice were taken to the NIMH labs and injected with a needle full of fuck knows what. One of these experiments led to their advanced intelligence and eventual escape, which brings us into another terrifying tale revolving around the struggles of love, betrayal, and ultimate power. Also, I can’t be the only one who thought that damn cave of bones dwelling owl, was completely terrifying with those glowing eyes and no-nonsense demeanor.

Oh Jareth, how I love your cruelty! Being the oldest in my household, there were many a time I wished for the disappearance of my younger siblings. The Goblin King, gave Sarah her wish to have her little brother taken away by the goblins, much to the surprise- and dismay of our heroine. Dodging the bog of eternal stench, strange creatures, and Jareth’s charm all along the way, Sarah sets out to save her infant brother. This one borders more on the creep factor rather than scaring the crap out of you with its twisted cinematography and Bowie’s performance of a powerful, no bullshit-taking ruler. I think the only thing that really frightened seven-year-old me, was Jareth’s protruding bulge. That thing had its own goddamn zip code.

The Return To Oz

Holy hell, where do I even begin with this little treasure? Floating, screaming heads, a ten-foot-tall walking Jack-O-Lantern, a headless witch that will take yours, the Gnome King, and of course- The goddamn Wheelers. If you’ve ever happened to pick up any of the original OZ books, they really aren’t too far off from this. Making this addition in particular, probably the one that rings most true to the infamous Frank L. Baum stories. Within the first 15 minutes, Dorothy is dragged off to a mental institution for some shock therapy.

Oh, what’s that a talking Lion?

That’ll teach you to talk about your fantasy worlds to adults little girl.

Arguably the greatest goddamn Disney movie… EVER. Why you ask?

Well, lets break it down:

The Black Cauldron is most unique in the Disney Rolodex of animated films. As stated above, there are ZERO musical numbers in this gem. Pretty much unheard of for any Disney animated movie. The tone is much darker than your average Zippity-Do-Da flick, and the main villain, the Horned King is flat out awesome. And scary as hell for a three-year-old who was taken to the movies expecting another Aristocats dance-fest. Instead, you get the cutesy character Gurgi leaping to his (seemingly) death, and pretty much every scene of the soulless Horned King scaring the crap out of you. What a seriously underrated Disney villain.

Laugh if you must, but in the case you are, YOU UNDERSTAND NOTHING AND HOW DID THIS NOT FREAK YOU OUT AS A KID?! Listen, I grew up on horror films. And while most just provided good ole entertainment for me and zero scares, hell I laughed at Freddy and Kincaid from Dream Warriors, E fuckin’ T gave me serious nightmares. And my dad, in a perfect parenting win fashion upon knowing of my uneasiness with the long-necked alien, preceded to put a poster of this little asshole right above my bed at the tender age of three. Such a dick move Dad. Though, I’ll confess the apple doesn’t fall far from the tree and this is something I would 100% do to my own children.

Anyway, this piece of nightmare fuel, with his long bony fingers touching shit, elongating his neck like a little asshole and glowing red heart is the stuff of pure nightmares. Oh yeah, that little alien is a zombie. Lying there all white, ghostly, and ummm DEAD; and then springs to life mumbling some undead garbage about phones. GTFO.

As a child, I had only seen the Rankin/Bass 1977 television special once via an impromptu VHS rental my mother had brought home from work; and that was quite enough. Thanks for traumatizing me for life by the way, life-giver. Is it just me, or do any of the Rankin/Bass gems always seem a little on the creepy, and or morbid side? Like the time a bunch of mythological beasts and demons decided whether Santa Claus should live or die, (The Life & Adventures of Santa Claus, 1985).

Anyway, 1977’s The Hobbit was sustainably creepy in its own right.  Case in point, the Gollum creature in particular. Sure enough, Smaug shined as a scary enough animated villain; but not like Gollum. Due to the way Gollum was drawn and his froggy-voiced dialogue, this little shit came off as terrifying in the midst of this fantasy visual. Of course, when we’re talking about a prequel to pretty much the end of the world and men, I think its fair to have a few horrifying characters in the mix of such a story.

What so-called family-friendly films scared the living crap out of you when you were of a substantially shorter height? Let’s talk some nightmare nostalgia!