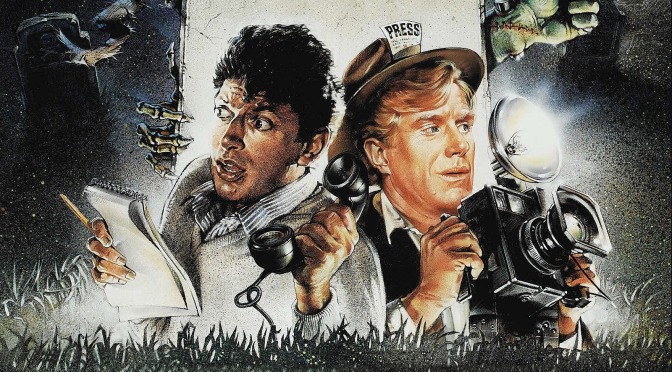 It seems these days the world is coming up Jeff Goldblum. That sexy salt and pepper sumbitch is everywhere and I don’t see a single person complaining. But Mr. Goldblum isn’t new to the party. He didn’t share himself with the world starting from Jurrasic Park. No…there is a movie before that in particular when I was first introduced to him before he was Dr. Ian Malcolm. I’m talking about Transylvania 6-5000 (1985).

This movie is a goddamn gem. It was written and directed by Rudy De Luca. It stars Jeff Goldblum as Jack Harrison and Ed Begley Jr. as Gil Turner. Both men star as tabloid journalists looking for a story to save their jobs. When a video is found showing a possible Frankenstein’s monster attacking tourists in Transylvania, their editor sends them on a trip to find the monster or find themselves a new gig. Stakes are high and the duo head to Transylvania to find the evidence. 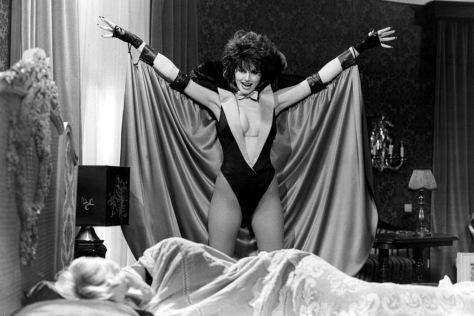 Immediately Jack gets a love interest in the form of Elizabeth (Teresa Ganzel) in all of her big eyed, high pitched glory. Gil is the bumbling dope of the two and immediately embarrasses them. At their hotel owned by Mayor Lepescu (Jeffrey Jones), they are greeted by the strangest butler, Fejos (Michael Richards) and over their visit meet a ragtag group of hilarious classic monster movie rip offs like Odette (Geena Davis) a “vampire,” Radu (John Byner) and his wife Lupi (Carol Kane) the hump-backed servants, a wolfman (Donald Gibb) and Dr. Malavaqua (Joseph Bologna) the mad scientist.

There’s a scene where Gil gets backed into a lake where he is knee deep in water. Out of the murky water rises a hand that immediately grabs his business casually dressed Begley dick. The reaction is perfection and is hands down one of the funniest scenes in the movie.

I have seen Transylvania 6-5000 at least a dozen times and it never gets old. Geena Davis is hilarious, Jeff Goldblum does his Goldblum thing, and Begley Jr. is a hot mess in the best sense of the word. See this movie…you’ll thank me for it. 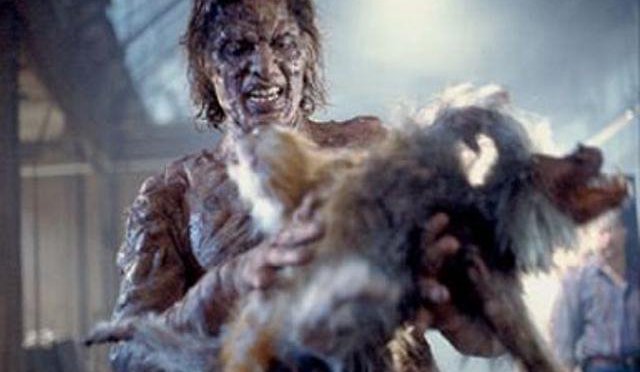 Apart from being one of the most beautifully put-together horror movies of the 20th century, (and a remake at that!) Cronenberg’s The Fly might also be the one that induces the most nausea.

I mean, come on. Those of us with that serious gag reflex upon seeing others vomit have to pop a roll of TUMS before a viewing.

Blowing chunks of sugary Hostess donuts aside, the official theatrical release wasn’t even the worst of it. For those unaware, there was a scene so vile, so grotesque and disturbing that during an initial screening in Toronto, it made audience members queasy and a tad upset to say the very least.

In the cut scene, Brundle (Sir Jeff of Goldblum) seeks to reverse his ever-transforming state by teleporting a baboon and a cat from the two telepods into a third while keeping their molecules separate. Instead, it fuses them into a very disturbing “mistake” that he ultimately clubs to death to put Monkey-Cat out of its misery.

According to Producer Stuart Cornfield, the theater guests were disgusted to the point of projectile vomit. The movie has some pretty nasty scenes that could definitely make someone gag a little (as stated), but I suppose this really was just a bit much for some. Apparently, the general public didn’t take to kindly to Brundle experimenting on helpless animals and then bludgeoning them to death.

And it was never seen again until a special two-disc DVD edition was released from 20th Century Fox came about.

The scene had it been kept in, would make some folks take away any pity they may had for Seth, turning him from a helpless victim to an animal-murdering dickbag. However, I can see what they were ultimately aiming for.  What I personally see through my own eyes, was an act of complete desperation. Brundle was halfway through his transformation and scrambling to find a cure as time was running short. You could see the defeat in his mangled face after the terribly gone wrong experiment on the roof, and ummm, ripping off an insect leg that had spawned from his stomach with his mouth. The whole scene is slightly painful to watch, but at least for me, not in a bad sense. There are a LOT of scenes from this film that will make you squirm. In my opinion, the scene with the dog in The Fly 2 was way worse than this.

But hey, you be the judge of that!

The Gods of hairy chest hairs have answered my prayers over at Funko.

You may, or may not have heard all about the new Jurassic Park line of Funko POP! figures coming our way amidst the film’s 25th anniversary. And those are just fine and dandy. Hell, who wouldn’t want a velociraptor POP!  nestled in between Battle Armor Skeletor and our beloved Barb from Stranger Things. However, the soon to be released and appropriately named, “Wounded Dr. Ian Malcolm”, will be a Target Exclusive- and oh my God it is the most glorious thing ever.

The upcoming series of Dino-riffic pops features paleontologist Dr. Grant, Jurassic Park CEO John Hammond, (unwounded) Dr. Ian Malcolm, and embryo-smuggler Dennis Nedry. Along with dinosaur favorites, the great T.rex, Velociraptor, and Dilophsaurus with a double pack including an attacked form of Nedry coming in March and available only at Entertainment Earth.

Great, now I have to invest in another Funko shelf for the apartment. 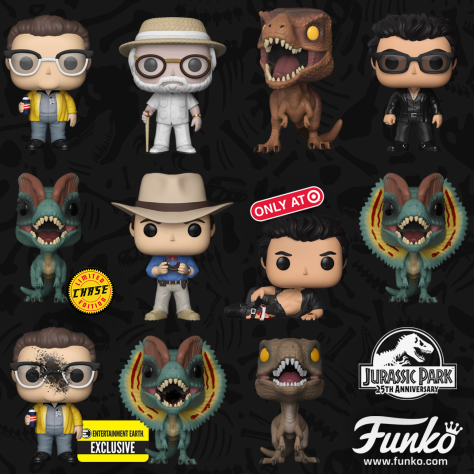