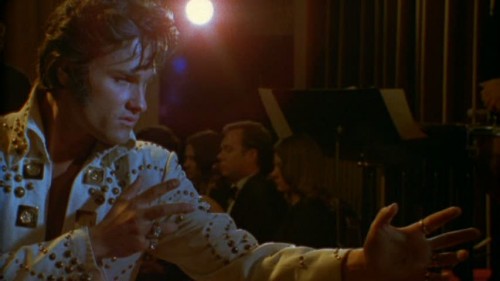 It’s one of those things that if you didn’t know, you’re mind just got friggin’ blown like a scene from Scanners.

I was one of those people, and I’m seriously pissed off that nobody bothered to tell me that this national treasure existed. FOR SHAME on you, while I hang my own head in humility.

Anway, upon learning about this hidden-from-me-gem, I immediately ordered a copy (and you should too) from Amazon, and gave it a view over this past weekend. I was not disappointed folks.

Fresh off the massive genre hit with fans Halloween, Carpenter aimed his directorial skills toward the smaller screen with 1979’s made for TV biopic Elvis. Starring in his first of many Carpenter films, Kurt Russell takes on the daunting task of portraying the man, the myth, the lip-curl himself, along with Russell’s real-life father Bing Russell playing Elvis’ father Vernon in the film as well. Which would totally account for the believability factor as far as paternal ownership in the movie. Shelly Winters (Roseanne, The Poisedian Adventure) tackles the important role of Mama Gladys- if you’re an Elvis fan, you know how much this man loved his mama. Also starring Halloween alumni Charles Cyphers, Pat Hingle, and Russell’s ex-wife Season Hubley as Priscilla Presley, Elvis is a wonderful Carpenter family affair on-screen that respectfully pays tribute to the trials and tribulations of rock legend without diving into his death.

Made only two years after the King’s passing, the 150-minute biopic focuses on the star’s childhood, the rise and peak of his fame, and the important relationships in this legend’s life that affected an empathetic man so greatly. According to reports, there are two other versions of the film that aired in the UK beginning with Elvis’ hair being cut before his entrance into the US army, and then the death of his mother. With a great deal of the story being told before these two incidents appear in the film, I’m certainly glad that wasn’t the final cut! We cannot be deprived of that wonderful Shelley Winters, now can we?

Apart from the obvious, and at times not so great lip-synching, Russell’s Elvis persona is by far, my favorite I’ve ever seen. You’re also talking to a born and raised Vegas girl here, and I’ve seen COUNTLESS impersonators in my lifetime; more than I even care to. But, Russell really does pull it off embodying the very spirit of the King right down to his signature movements and hell, he really does look like him too! So that’s a pretty great bonus. With portraying a personality as large as Elvis, it’s so easy to go overboard (haha) with it. However, with Russell, it seems natural. Which speaks volumes about his acting chops. Fun fact: Kurt Russell actually appeared in an Elvis film, It Happened at the World’s Fair in 1963, where a mini Russell kicked the King of Rock and Roll in the shins. Russell also dubbed the voice of Elvis seen in Forrest Gump in ’94 and played an Elvis impersonator in 3000 Miles to Graceland. So I suppose it’s fair to say Russell has had his fair share of defining Elvis moments in cinema.  However, Carpenter’s Elvis should, and I think is, his crowning achievement in his lip-curling legacy towards the once Graceland resident.

Originally airing as part of an ABC Sunday night special movie in 1979, Elvis went on to receive nominations from the Golden Globes including Best Motion Picture Made For Television and an Emmy for Outstanding Lead Actor (Russell). Didn’t win, but well deserved in any regard.

If you’re an Elvis fan or a lover of made for TV glory, I highly recommend picking this diddy up and adding it to your collection.

Click the image to pick it up over on Amazon!