The year was 1984.  The very first commercial for the revolutionary Apple Computer premiered at the beginning of the year, foreshadowing an irreversible change in the way we live for an entire generation. While one can argue this may very well be, the most significant moment in ’84, (or hell an entire decade), most horror fans may dispute that. 35 years ago today, one of horror’s biggest icons was born from the mind of the late Wes Craven-Freddy Krueger. Robert Englund gave him a body, Craven the brain- see what I did there- and unleashed Freddy Fever unto Generation Y that shows no signs of slowing up all these years later.

Of course, there hasn’t been a relevant enough bootleg Freddy toy to catch my attention over the last 20 years. But, maybe that’s for the best, yeah? 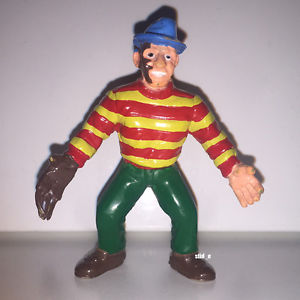 While I can’t speak for every single child of the ’80s, Freddy Fever rose high and rampant over the course of a decade, introducing an entire generation to the horror genre due to Springwood’s Slasher popularity. Nancy said it best, “Every kid knows who he is. He’s like Santa Claus.”

And even celebrated much more so by the horror fandom than the generous, jolly ol’ dude. With on-screen heroes emerging in the decade like Indiana Jones, Rambo, and pretty much any Arnold Schwarzenegger film, Freddy rose to the ranks of a hero of a generation of horror movie fans by being nothing more than the ethos of pure evil- well with later added slapstick comedy which only BOOSTED all the diehard FredHeads (myself included) to put him on a higher pedestal; rounding out the Holy Horror Slasher Trinity with his buddies Michal and Jason.

I mean, you’ve really made it when MTV (when it was you know, amazing) lets you VJ and just end up doing whatever the fuck you want. That’s some star power.

All that being said, WHAT exactly had the youth of our generation so insanely captivated by well, a brutal child killer? I can only speculate on watching Freddymania evolve throughout the ’80s, and ’90s, to today’s hardcore fanbase that follows Freddy and Friends to the ends of the Earth via social media and horror conventions (I’m totally one of those people), and speaking with fellow FredHead buddies. And the answers are pretty quite simple: The children are the warriors of this horror franchise. They are the ones who recognize the evil while the adults stand around with their thumbs up their asses. THEY are the ones who stand together, (just look at Dream Warriors) and face their enemy head-on. So it’s only natural an adolescent would gravitate toward something they could possibly relate to. Society is often guilty of not listening to our youth and A Nightmare On Elm Street made that loud and clear folks.

Another reason and this is personally true in my case being a female, is that each of the NOES films gave us the absolute, most ass-kicking heroines that any young girl would be proud to look up to. First off, let’s just get this right out of the way- Nancy is the goddamn Queen. Even though it was quite clear that she was slowly getting edgier as the film progressed- to be fair she was working on a week’s worth of almost no sleep while Fred was trying to murder her– she really had the most logical and sturdy head out of EVERYONE in that entire film. Including her parents. Not to mention she went full Rambo on Krueger’s ass. I’m not going to sit here and try and argue how she managed to set all those booby traps, fall asleep, and capture Freddy all in twenty minutes of film time. Let’s just appreciate the fact that this girl went balls to the wall, going as far as tackling her predator to the ground WWF style in one giant FUCK YOU to his face. And then she turns her back on him and calls him “shit”.

Last but not least, A Nightmare On Elm Street has always been seen by me as a “comfort horror film”.  Over the years, I’ve written several articles on how horror films actually soothe my anxiety- And the NOES films are exactly that for me. Comfort in times of stress and the harsh realities of the real world. I refer to films like these in a term I coined, “FANTASTICAL HORROR”. You see, movies like Halloween and Friday the 13th (only the first, after that they became FANTASTICAL), were very much real to me. THAT SHIT COULD ACTUALLY HAPPEN. It’s very plausible an escaped lunatic could go on a killing spree or a deranged childless mother going apeshit on a group of kids. With NOES, mehhhhhhhhh, highly doubt a burnt-faced demon is gonna kill me in my dreams. Not to say one could never die in their sleep, or to take away the fact the movie really is terrifying in other aspects. But, it’s not realistic to me. And that’s ok! In times of real-world tragedies, shitty adult issues, and when the world seems so ugly that you want to pack up and move to Mars, Freddy and the gang are here. To take us to DreamLand. To a place that takes us out of reality and into the world of Fantastical Horror.

You know, kinda like Harry Potter but cooler. Don’t you Hogwarts fans @ me.

Happy anniversary Freddy and the gang. And to all my fellow sons and daughters of 100 maniacs who keep the fandom of this movie as strong as ever. WE are all his children now-and forever.