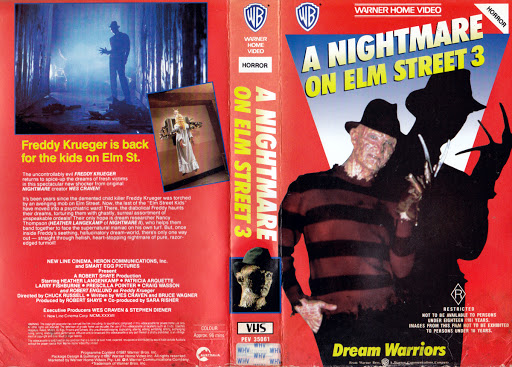 In case you’re new here to Nightmare Nostalgia, one of my oddball favorite things in this world is finding old VHS retailer promos. If this is your sort of kink as well, there’s plenty on the site here if you look around! However, one in particular I haven’t been able to track down until very recently. And it is of course A Nightmare on Elm Street 3: The Dream Warriors– my personal favorite of the franchise. So you can bet your sweet dreams I was as giddy as Freddy seems to be promoting the shit out of his new film back in 1987.

If you need a refresher, or are just plain asking what the hell a VHS retailer promo is, it’s basically a special media kit made for VHS stores and chains across the country persuading buyers to get said movie into stores. These days, they are obviously hard to come by unless you had family in the industry that owned one of these Mom and Pop shops. However, thank the glorious VHS gods for Youtube. As we can find some real treasures uploaded on there.

Anyways, as Freddy proclaims in the promo, Dream Warriors “isn’t your average Drive-In movie schlop we got here.” As the film ranked in twenty-five million bones in the first two-week run throughout the theater release. Going on to make over 44 million in theater revenue, making it not only, the most profitable horror sequel to date at the time; but the biggest rake in for an independent film! So why the hell is Freddy hawking the film like a sleazy salesmen you ask?

The answer is WHO CARES. He did the same for Dream Master and Dream Child and it’s easy to see he loved every second of hamming himself up as Freddy. And he can do it forever as far as I’m concerned.

In the promo, Freddy and the narrator walk us through the accomplishments the Nightmare franchise to date via critic praising, talk show spots, and of course a dash of Dokken to get the beats dropping! Then we get to the bribery part, (honestly do we really need it?) Where if retailers but a set amount of video tapes for the store, you get some cool swag to help promote the movie inside the store as well. I’m still looking for that glorious poster light box if anyone has it collecting dust in that storage unit- just throwing that out there, hah! And the kicker here, a shout-out to the back-in-the-day-all-the-rage “Be In My Nightmare” sweepstakes which you could only enter through your local participating video store via a mail-in or drop-off slip. I still don’t know who won to this day, but I must have entered at least fifteen times. Not even sure if that was against the rules but as a kid, like I cared.

Well anyway, here you are my Nostalgic Nuggets, with special thanks to this upload via YouTuber Beyond Sour Grounds, the long-lost VHS Retailer Promo for A Nightmare On Elm Street 3: The Dream Warriors in its entirety!

3 thoughts on “Welcome To Prime Time With The VHS Retailer’s Promo For A Nightmare On Elm Street 3: The Dream Warriors”