In keeping with the theme of celebrating Poltergeist‘s legacy on it’s last year before the film hits 40, I wanted to highlight a scene that although filmed, never made the cut into the final film. Poltergeist is rich in film lore history and the fascination surrounding the supposed curse, is just one piece of the horror puzzle that has captivated fans throughout it’s run in the 80s’ and beyond in the present. And if you’re a superfan like myself, you might know about this somewhat cringy bit that has since been lost to the abyss of the editing process. Let’s talk about that spider ceiling scene.

Tentacles have been an obvious theme in the first two films, albeit more pronounced in the second film, however here in what was to be an extended and more brutal scene involving Diane (JoBeth Williams) after her bath, it basically gives The Entity (released in the same year) a run for its money. The scene without the added context strongly suggests sexual assault, but the deleted scene takes it to full on rape.

Well, that alone would have indeed given the film a hard “R” rating and I can certainly appreciate why they made the decision they did. I for one, think it may have taken away some of the sophistication the movie has engraved in it with it already embodying plenty psychological scare tactics without all the gore, guts, and torture porn. Don’t get me wrong, I love me a good gorey trash flick. But with Poltergeist, it just doesn’t fit in well with the purity and horror innocence of the film; which is what makes it so damn great. Although I admit, I don’t think I’d be able to suppress the curiosity that resides in me if this footage is ever unearthed and released.

The above images credited to the ultimate Poltergeist fan site, poltergiestiii.com, are the first to my knowledge to have been displayed on the internet. It’s also a fantastic go-to for anything on the film(s) you would ever want to know- so I highly suggest rummaging through their web pages for some fun trivia and stills on the movies.

Normally I don’t write too many news articles unless it’s something sent directly to me via a press release and falls in line with NN’s nostalgic fuzzies oath. However, being as how this one hit my hometown and involves two of horror’s biggest creepy iconic dolls, I just couldn’t pass up spreading the news that Las Vegas resident Zak Bagans just bought the original Poltergeist clown doll and one of the used Chucky dolls from the 1988 film to proudly set up in his Haunted Museum here in Sin City.

Am I surprised the guy who has Ed Gein’s cauldron and briefly the original Annabelle doll made these purchases? Not a bit. Do I think these dolls are haunted? Again, hell no. But I suppose it will bring a new crowd of curious folks over to the famed house of horrors with loyal fans to the franchise.

About a year and a half ago, myself and the better half visited the now famed museum along with a group of friends. Us being locals and all had to keep our horror cards valid with being able to say we walked though the 30-room mansion. At the time of our visit, Anabelle WAS there but not on display. However, that didn’t stop our tour guide from pulling back an ominous curtain as the group pressed on to another room exposing the Raggedy devil to a friend in the group. Of to which I was a little pissed that my anxiousness to get to the Bela Lugosi mirror backfired on me. Just a little tip for those that may visit in the future- WAIT FOR THE TOUR GUIDE TO LEAVE THE ROOM.

Anyways, Bagans purchased the Poltergeist prop nightmare at an auction for a whopping $80,000 and states to TMZ that for the time, the creep-tastic nightmare fuel will safely stay in his room for a test run and will end up in the museum at a date yet to be determined.

1982’s Poltergeist has long been rumored to be a film riddled with some sort of curse extending into the sequels that include a string of bad luck and many deaths surrounding the movies. While I myself think that much of those occurrences are mere coincidences, one of the most questionable details coming from the original film was Robbie’s Superbowl poster hanging above his bed predicted the date of co-star Heather O’ Rourke fell fatally ill in 1988. The cursed rumor of course, was probably fuel for Bagans to obtain the little guy.

You can read more about that here.

More recently also, the Ghost Adventures star managed to snag one of the Good Guy props from the original 1988 Child’s Play film; for $11,000. Not as much as clown boy above, but still a certainly good chuck of change. The movie prop as well has a TBD debut date at the Vegas attraction.

For more information about the museum, check out the official website by clicking here! 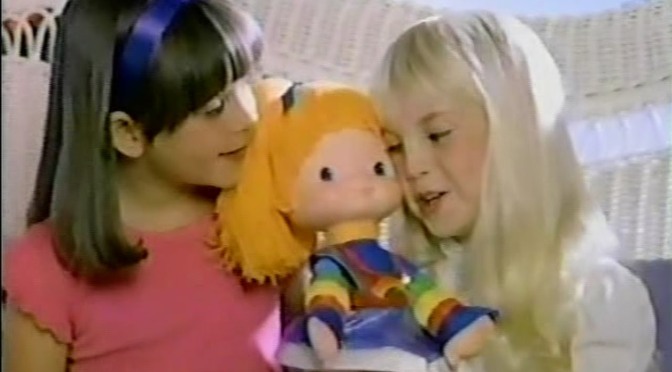 In 1984, the first Apple Macintosh computer went up for sale commercially, Madonna humped the stage at the first MTV video awards, and Ghostbusters rocked theaters around the world. But, most importantly, a little toy was introduced to millions of young girls all over the world that was about as glorious and magical that can only be compared to Rambo riding a Unicorn. That toy my friends, was Rainbow Brite.

Introduced by Hallmark and following the success of Care Bears, phenom toy company Mattel acquired the license to make a line of unique and colorful dolls that every little girl would run their grandmother over to own. The Rainbow Brite line launched in 1984 alongside the animated series with originally just Rainbow Brite and four color kids (Red Butler, Canary Yellow, Patty O’ Green, and Indigo) with sprite friends included.

Might I add, if you’ve managed to keep these dolls over the past 30+ years WITH their sprites, kudos to you because in a lot of cases those little bastards get lost over time.

Of course, the franchise that vomited rainbows and star sprinkles all over the shag carpet advertised countless other toys, books, and audio tapes for Rainbowland seekers. However, the dolls themselves are the holy grail of the merch line. And we needed someone just as adorable and endearing to pawn these 10′ plush dolls with plastic heads to young girls on a national level. Who better than Heather O’ Rourke? Because hey, she knows a thing or two about interdimensional traveling to other worlds, am I right?

Check out the Poltergeist star below spreading Rainbowland love commercially!