Man. The deeper impact this deleted scene from A Nightmare On Elm Street gives to the word “private justice”, should have been left in.

The fact that Freddy-Mania took over the 80s’ and the unforgiving character that lived off the blood of children became a pop-culture phenomenon, kind of blows my mind. I was totally a part of the Freddy Fandom as a kid and still am to this day. However, thinking back now as an adult how Freddy was mass marketed to children from bootleg toys, plastic Halloween costumes, horror hotlines, and even a stint on MTV, just goes to show he was a true force to be reckoned with the future of America.

Yes. We are the generation that holds a child-murderer as a GOD in the genre and we make no apologies for it.

But I kind of feel bad about it now and you might too after learning that Nancy wasn’t always an only child. In fact, Freddy killed him/her. And is what drove Nancy’s parents to the brink of madness in doing what they did to him.

Knowing this now, the final battle between Nancy and Freddy makes it that much more personal; as it would for just about anyone that had a family member killed by a son of a thousand maniacs. Why Wes Craven chose to discredit it entirely and keep this particular dialogue out of the scene between Nancy and her mother Marge in the basement (of which most of the rest was kept in the movie), I suppose we might not ever know. But it surely adds a lot more hatred between the characters. In the rough cut of the scene provided by YouTube Channel Gabi Ferretti below, it also hints Nancy’s friends’ Rod, Tina, and Glen also had siblings that were murdered by the cruelty of Krueger- which would lead us into the private justice and mob mentality nature of his origins. Also, it’s sort of full-circle that the remaining siblings are so close-knit now. Or were rather as they were picked off one by one in the movie.

This could have changed the whole tone of the film, but personally I feel like it should have been kept in. It just adds to the cruelty that really was Krueger. Then again, had they gone into a deeper explanation painting a picture of his pure evil, we may have never had lunchboxes with Freddy’s face on them as kids.

What do you think? 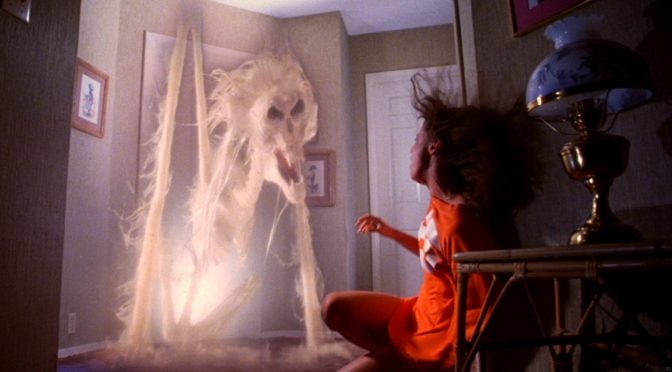 In keeping with the theme of celebrating Poltergeist‘s legacy on it’s last year before the film hits 40, I wanted to highlight a scene that although filmed, never made the cut into the final film. Poltergeist is rich in film lore history and the fascination surrounding the supposed curse, is just one piece of the horror puzzle that has captivated fans throughout it’s run in the 80s’ and beyond in the present. And if you’re a superfan like myself, you might know about this somewhat cringy bit that has since been lost to the abyss of the editing process. Let’s talk about that spider ceiling scene.

Tentacles have been an obvious theme in the first two films, albeit more pronounced in the second film, however here in what was to be an extended and more brutal scene involving Diane (JoBeth Williams) after her bath, it basically gives The Entity (released in the same year) a run for its money. The scene without the added context strongly suggests sexual assault, but the deleted scene takes it to full on rape.

Well, that alone would have indeed given the film a hard “R” rating and I can certainly appreciate why they made the decision they did. I for one, think it may have taken away some of the sophistication the movie has engraved in it with it already embodying plenty psychological scare tactics without all the gore, guts, and torture porn. Don’t get me wrong, I love me a good gorey trash flick. But with Poltergeist, it just doesn’t fit in well with the purity and horror innocence of the film; which is what makes it so damn great. Although I admit, I don’t think I’d be able to suppress the curiosity that resides in me if this footage is ever unearthed and released.

The above images credited to the ultimate Poltergeist fan site, poltergiestiii.com, are the first to my knowledge to have been displayed on the internet. It’s also a fantastic go-to for anything on the film(s) you would ever want to know- so I highly suggest rummaging through their web pages for some fun trivia and stills on the movies.

The epic sequel to Spielberg’s 1975 film that had us all fearing for our lives stepping foot unto a beach, has turned the classic 40 years young. And to celebrate, I’m showcasing what the MMPA decided to censor to audiences theatrically back in 1978 for JAWS 2– the goddamn death of the helicopter pilot! And if you haven’t seen it, trust me, it’s so damn satisfying.

Yes, friends, another animatronic Bruce came back to terrorize Amity Island as revenge for Bruce numero uno being blown to smithereens by the local sheriff. While I certainly have a lot of love for this movie, I mean fucken aye it’s JAWS people, it certainly restricted itself on the lack of blood as opposed to the first film. In fairness, there wasn’t a TON of gore in the original JAWS. However, this one had barely any at all. And we’re talking shark attacks here! You’d assume there would be buckets of red corn syrup all over the damn screen. But alas, on the heels of the mondo success of the first film and cringing studio execs, JAWS 2 had to be watered down a tad to appease the pearl clutchers of the generation.

Before we get to the scene in question, that was shown during various TV runs during the 80’s (which is why I even knew it existed), can we just appreciate just how badass Bruce II really is? I mean, this shark seems ten times scarier and more malevolent than it’s brother, cousin, whatever from the first movie. Not only does it take down the water skier in the first half of the film, but the boat and driver with it resulting in blowing the damn thing up. Of course, that was the work of the obviously terrified boat driver in the midst of a Great White eating her boat, but eh, gotta give credit to Bruce II for making it possible. And then we have this wonderful helicopter scene, in which if you’ve seen the cut version only, kind of raises some questions on the whereabouts of the pilot.

Here we have this poor guy just trying to do his damn job and help these teenagers out. Bruce II isn’t having any of this shit. He’s like, “HOW DARE YOU TRY TO HELP THESE KIDS! I’LL SHOW YOU BY GOD.” And he sinks a friggin’ helicopter. But, what the hell happened to the pilot? We can just assume he drowned if anything. And he does of course, but we actually get to see it this time. And it looks as if he serves as a tasty snack after all for the hungry island visitor. Visual satisfaction at the very least. Also, if you listen very closely, the pilot’s screams sound an awful lot like Hooper’s when he’s attacked underwater in the shark cage.

So here it is! Originally uploaded on YouTube by RetroTV from an ABC original airing complete with a LEGGS pantyhose commercial at the end to break away. Because, you know, that’s super important here. Enjoy and happy anniversary JAWS 2!