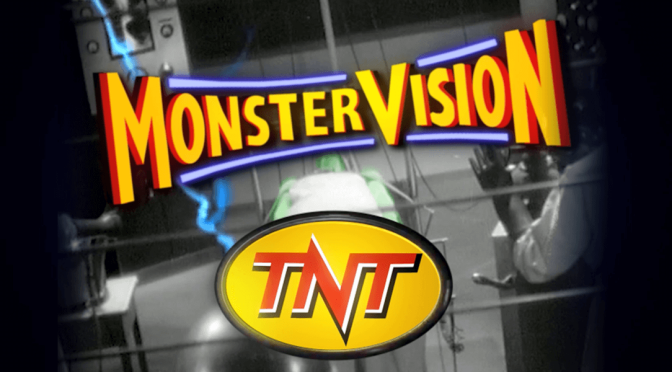 And on the seventh day, the Horror Gods revived a beloved program to the wonder and excitement of fans everywhere- Joe Bob Briggs is back folks!

Nothing really grabs our horror nostalgic feelers by the balls quite like the scary-movie-weekend-marathons with a horror-host-with-the-most. With the height of the slasher era in the ’80s and ’90s, many local stations from around the country offered this sort of sweet deal with a local celebrity pimped out in a killer horror-style get-up. However, nationally speaking, TNT gave us the beautiful program Monstervision with the sarcastic-infused cinephile cowboy Joe Bob Briggs in 1995. And it was love at first sight.

Fans have been clamoring for “one last call” with the witty Briggs and Monstervision for some time now via the almighty and powerful interwebs. Well, it seems that that request has finally been answered as it’s been announced the Briggs will return, this time on Shudder, for a 24-hour horror marathon on Friday, June 22, 2018. The announcement of the date was made by Briggs’ via his personal social media, however, at this time it’s mysteriously nowhere to be found. Which could be due to multiple reasons. However, that is the date as of now and if anything changes or I get in trouble here for throwing that particular day out there, I’ll update this article accordingly and pull that 10-gallon hat down shrouding my shameful face.

In any regard, we’re all just excited that Joe Bob is making a much-deserved return and who knows, maybe AMC FEARFEST will smarten up and bring him into the 2018 line-up! It’s worth mentioning anyway.

Per a representative of Joe Bob Briggs, it seems the announcement concerning the date isn’t set in stone quite yet, (hence the missing social media post). However, the Shudder marathon is still a-go for June with an official date coming soon! Will update this article when it drops.

Never has an actor done less and been universally adored. While many (properly) laud Anthony Hopkins and Doug Bradley for the icons they fashioned in little screen time as Dr. Hannibal Lecter and Pinhead, respectively, they were featured players compared to the man of the hour. Nearly four decades since last creeping around Camp Crystal Lake, Walt Gorney remains the unofficial mascot of one of horror’s most beloved franchises, and today we celebrate the 107th anniversary of his birth.

Armed with nothing more than a crumpled hat, dingy vest, and a few ominous words of warning, Crazy Ralph endeared himself to FRIDAY THE 13TH fans everywhere, and has life to this day.

For as much as Friday freaks adore Jason and revere Pamela Voorhees (Betsy Palmer), all one need do is whisper “doomed” to rally the troops. Maybe it was the wobbly way he piloted his bicycle, the gleeful, sarcastic taunt of “You’re goin’ to Camp Blood, ain’tcha?,” or that he had occasion to hole up in pantries. Whatever the reason, FRIDAY THE 13TH aficionados have never tired of a character that last appeared on a screen almost 38 years ago.

Born in Vienna, Austria in 1912, Gorney will be forever remembered for getting liquored up, spouting his gospel, and being a pain in Officer Dorf’s ass. However, we’re not allowed to forget that he had a successful stage career, which included involvement with the Provincetown Players theatrical group in the 1950s, or that he made brief appearances in KING KONG (1976) and TRADING PLACES (1983).

Sad, in a way, that Gorney was 68 years old when the original Friday film debuted, because conventions being what they are today, few would be as popular on the circuit as Crazy Ralph. As legendary horror host Joe Bob Briggs once said, “If the old geek says you’re doomed, then you’re by God doomed.”

Alas, it’s been 14 years since Mr. Gorney left us, but for as long as FRIDAY THE 13TH has a following, he will never be forgotten.

So, wherever you find yourself whetting your whistle tonight, raise a glass in honor of the man who is, was, and ever shall be Crazy Ralph – Walt Gorney.

So John Kransinki’s A Quiet Place raked in over $50 million in its initial weekend, further solidifying the horror revolution that we’ve enjoyed for more than two years. Kransinski was so effective as a father doing all he could to protect his children and pregnant wife, that it occurred to me that Jim Halpert was not the only alumnus of The Office to make a dent in the world of horror.

Here are just a few who’ve also made a lasting impression.

“Question.” No one was as painfully and rudely inappropriate as Dwight K. Schrute, nor could any inhabitant of the Dunder Mifflin branch irritate Michael Scott quite like our favorite beet farmer. Well, maybe Andy. That said, the fact that the Assistant to the Regional Manager’s queries never came to an end, it was altogether fitting that what made Wilson’s appearance in House of 1000 Corpses so memorable (and ultimately sealed his doom), was that his curiosity could not be quenched.

She rode in as Jo Bennett,  a no-nonsense southern belle, which wasn’t exactly in keeping with the shenanigans of Scranton, but American Horror Story aside, we’ll never have the capability to see Bates and not think about Annie Wilkes. Don’t get us wrong, Bates’ brilliance allows her to fully embody any role she chooses, but her turn as Paul Sheldon’s biggest fan was, well, a sledgehammer.

Let’s face it, Stanley’s monotone aggression and disdainful glances were part of his charm, but every day cannot be pretzel day. At first glance, about the best we could do was note that Baker appeared in an episode of Key & Peele. As we all know, Jordan Peele’s Get Out provided us with the most important horror film since George A. Romero’s Night of the Living Dead (1968), but this isn’t six degrees of Kevin Bacon, so instead, let’s turn to Dwight’s display with the CPR mannequins, because no one was more terrified of that Lecter moment than Stanley.

Big man admitted that he’d be upset if he didn’t at least get a bite of the Milky Way in This is the End, but no one who’s seen Tragedy Girls can say that they A) didn’t absolutely adore the Brianna Hildebrand and Alexandra Shipp-helmed hit, or B) elicit a squeal upon seeing Robinson on-screen pumping iron and rallying the community.

Pam’s relationship with Jim felt so real that it has become the goal of everyone who desires to live the dream. The foundation of that love was achieved whilst Fischer sat at her desk taking calls and conspiring with Halpert to mess with Dwight, so it’s rather perfect that Fischer rocked a phone headset as a bunch of creepy crawlers entered the equation in Slither. And don’t call her Pammie.

Brief though his appearance as Danny Cordray was, Olyphant is part of The Office universe, and as such, we can look past David, the heroic cop in Romero’s The Crazies (2011), and instead revel in his crazy stance that Ewoks blew in Scream 2.

Charles Miner couldn’t determine what would motivate The Office’s workforce, but for our purposes here, let’s look past his appearance as Roland in Stephen King’s The Dark Tower, and instead take pride in the fact that Elba appeared in the Prom Night (2008) remake, as well 28 Weeks Later. And if we could go back to Fischer for a moment, “how do you confuse 28 Days with 28 Days Later?”