I should probably start off by saying this is purely an opinion piece on what I believe would be beneficial in this far from perfect world right now in regards to the push-back on Halloween Kills. Furthermore, I stand my ground on these words in light of the fact I do not bow down to any studios or anyone involved in the entertainment industry as I don’t take part in the so-called ass-kissing train to save face in order to continue to receive any free promos, screenings, or goodies. That’s not what I, or Nightmare Nostalgia is about.

In other words, I am a PR’s worst goddamn nightmare. No fucks given.

Now that the PSA is out of the way, let’s get down to brass tacks. Surely by now, you’ve all heard about the long-awaited sequel in the newly revived Halloween trilogy Halloween Kills, has been pushed back an entire year to October 15, 2021. The announcement made by John Carpenter himself on social media kind of threw a lot of fans for a loop. The film is cut and done; ready to go. And while one can certainly understand why maybe, possibly, going to the theaters in 2020 might be a bit of a gamble, there’s clearly always the VOD option. An option in which, some studios are using to their advantage, and others, well, are really not wanting to go that route.

Now I can understand a movie such as Halloween obviously begs to be seen the RIGHT way as a perfect cinematic experience. However, Universal and Blumhouse has opted out of the notion of releasing the movie this year to streaming platforms in the middle of a pandemic so that US, the patrons, can view it in the way that it’s meant to be seen. Because Goddess forbid we have anything nice this year.

Honestly, I think that’s a bit of a cop-out. A monster franchise such as Halloween should be giving fans the choice. I mean, who is to say things will be better a year from now? I would certainly hope they would be, but as it stands now Halloween as we have always known it, will be a far cry from normal in 2020. And given the mental state of the world slowly chipping away, it really would be nice to have SOMETHING to look forward to.

Now I also know some of you make look at this and say, “What a selfish bitch.” “REAL Halloween fans could wait an entire year.” Or the oh so clever and obvious, “There’s a whole world of horror out there to be discovered, focus on that.” I mean, those are all cute and all but here’s my point- now this might sound crazy:

I can also make the argument that REAL HALLOWEEN FANS, such as myself and many others would be more than happy to pay for it twice. There are so many people suffering greatly on the other side of this pandemic in the mental health arena and it would be such a nice goddamn thing in this shithole year we’re experiencing right now to have something to look forward to that’s coming SOON. Not another year from now. For those arguing otherwise, the term selfish is being thrown around quite a bit, so let me oblige by throwing it right back your way in the face of those horror fans struggling mentally right now. I am their voice. Which often gets stifled not just in the midst of chaos, but anytime really as people still don’t like to talk about it.

This leads me into another proposal since we’re supposed to be practicing compassion and empathy for each other’s health needs; why on Earth is this not a viable option always for people who physically CAN’T attend the theater? Should they have to wait six months later than everyone else because they are either physically or mentally unable to have that cinematic experience? In the face of a world that’s changing, I think it’s definitely time to stop and think about not just one, or two groups of people. But the collective as a whole. This planet is so incredibly diverse with all walks of life and no one should be made to feel any certain way about this until you know their story. I just really feel like this was an opportunity for a franchise that I love dearly to do something really great for not only the collective in this isolated world we must live in right now, but for the unheard fans as well that suffer greatly from both physical and mental distress. It really would have been an erm.. trick or treat for them!

Alright enough of my Ted Talk. Here’s that little cockteaser they put out.

Sigh. Anyways, I would love to hear from anyone who feels the same, or hey, if you just want to tell me to get bent feel free to comment below!

The moment the entire horror community and beyond has been waiting for the better part of the entire year is finally here Haddonfield residents! Lock your doors, bolt your windows, and turn out the lights, (see what I did there), the Boogeyman has landed! And this time around, Laurie is ready for him.

Laurie Strode comes to her final confrontation with Michael Myers, who has haunted her since she narrowly escaped his killing spree on Halloween night four decades ago.

In case you need a refresher:

David Gordon Green directs the movie with a script co-written alongside notable funnyman Danny McBride. Every sequel associated with the beloved franchise over the past 40 years, including in my humble opinion, the just as great as the original Halloween II, making this 2018 addition a direct sequel to the original from horror master John Carpenter. Halloween is throwing out the Laurie and Michael being related thing in favor of a fresh new look at the two subjects. In which case, I’m sure John Carpenter was thrilled with that aspect as he has stated repeatedly he regretted the decision of the whole brother VS sister route. Carpenter is serving as executive producer along with returning to his roots and overseeing the film’s cinematic score one more time.

Malek Akkad is producing for Trancas International with Jason Blum producing for Blumhouse Productions. Green and McBride will also executive produce under their Rough House Pictures banner. Zanne Devine and David Thwaites will oversee for Miramax, which is co-financing with Blumhouse.

Halloween releases nationwide on October 19th, 2018 to celebrate the film’s 40th anniversary AND Myers’ cinematic birthday according to the original franchise canon. 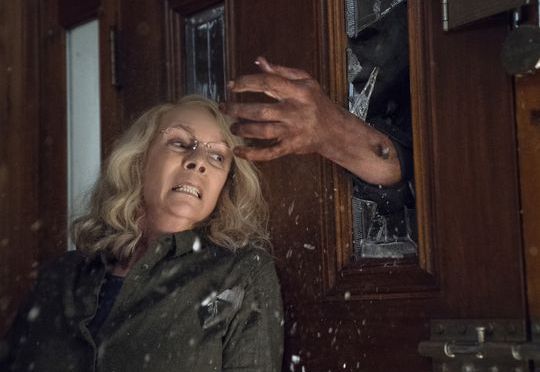 Universal Pictures and Blumhouse just released the first photos from the new Halloween movie and holy shit guys… Michael has finally found his way home and he is looking PISSED.

Seen first via USA Today, the following pictures give us a better look at an aged Michael Myers (portrayed once more by original Shape Nick Castle) and Laurie Strode (resurrected by scream queen Jamie Lee Curtis). The trailer, which drops this Friday, has given way to a surge of anxiety from fans all over the world as the hype for this one is almost as huge as last year’s adaptation of IT. And who wouldn’t be excited to have a good chunk of the original cast and crew back handing out Haddonfield boners to fans of the William Shatner nightmare?!

Check it out, guys!

In addition to Curtis, Halloween stars Judy Greer, Andi Matichak, Will Patton, and Virginia Gardner. Original Halloween director John Carpenter is back to executive produce and give us another nightmarish soundtrack for us to obsess over.

Halloween opens October 19, 2018. Stay tuned for the trailer this Friday!!